Get An Exclusive Look Inside ASK ME NICELY by Dania Voss
And Enter To Win A Gift Card, Necklace, Swag, And Autographed Book!

International Bestselling Author Dania Voss is celebrating the release of her new book, ASK ME NICELY (a frienemies to lovers romance), by giving away some amazing prizes to 3 lucky winners! Click here to enter!

He needs to ditch the attitude he has about her. She needs to get over her inconvenient attraction to him.

Successful Chicago real estate developer Spencer D’Angelo will do anything for his family. Well, almost anything. When it comes to his younger sister’s best friend, curvy blonde bombshell Harper Mitchell, all bets are off. Spencer is inexplicably drawn to Harper, but he’s never trusted her. Things just don’t add up. Harper’s trouble with a capital T, even if the rest of his family doesn’t see it, and adores her.

A California native, Harper unexpectedly finds herself jobless and homeless after the Feds raid the real estate firm she’s been working for. When her bestie’s brother, Spencer, the sexy, arrogant Italian who’s starred in way too many of her late night fantasies, begrudgingly offers her a place to stay in Chicago, she jumps at the chance to escape the chaos and darkness that have overtaken her life.

Harper and Spencer have traded insults and barbs from a distance for years, but now they can’t avoid each other. As their scorching chemistry ignites, Spencer becomes protective of her and Harper discovers there’s more to Spencer than his polished, business persona.

How can they continue on as the rivals they’ve always been?

What will happen when Harper’s secrets finally catch up with her?

Get Your Copy Here:

Excerpt from Ask Me Nicely

Commotion from the hallway drew her attention away from her phone call. What the hell? Only she, Alexander and two real estate agents were currently in the office.

“What’s going on over there,” Ariana asked.

“I’m not sure.” With a knot forming in Harper’s stomach, she cautiously approached her office door to investigate. Feeling uneasy, she glanced down the hallway toward the office entrance and her jaw dropped.

FBI agents, some dressed in plain clothes wearing navy blue jackets with “FBI” emblazoned on their backs and others wearing Kevlar vests, also displaying those three imposing letters on their chests, and carrying assault weapons, were storming into Alexander’s corporate offices.

Harper’s gut clenched, and an icy chill ran down her spine. “Oh, my God. The FBI is raiding our office.”

Bethany’s surprise and confusion matched Harper’s, and she trembled, unsure of what to do. She needed to speak with Alexander. He would know what was going on and what to do. The raid had to be a mistake. There was no other explanation.

“What the fuck have you gotten yourself in to, Harper?” Harper startled, taking a moment to register who was cussing her out. Spencer D’Angelo, Ariana’s older brother. He had never liked her and for the life of her, she didn’t know why. And because of his animosity toward her, she disliked him right back.

Unfortunately for Harper, her traitorous body hadn’t received the memo. Spencer’s deep, confident, arrogant tone never failed to arouse her. Heat consumed her, pulsing through her veins at the most inopportune moment.

“I haven’t done anything wrong Spence,” Harper shot back. Why had Ariana gotten Spencer? The situation, although not her fault, wouldn’t do anything to improve his opinion of her. Not that she cared what Spencer thought of her. Not very much.

“It’s Spencer for fuck’s sake.” Harper knew what his name was. It bothered him when she called him Spence – so she did and had for years, just to mess with him. Cocky, egotistical, sexy Italian. Lust and frustration warred inside her. Get it together, Harper. We don’t even like each other. And now is not the time.

Int’l bestseller and award winning author Dania Voss writes compelling, sexy romance with personality, heat, and heart. Born in Rome, Italy and raised in Chicagoland, she uses her background to create stories with authentic, engaging characters. A favorite with romance readers, her debut novel “On The Ropes,” the first in her Windy City Nights series, became a Barnes & Noble and Int’l Amazon bestseller.

Dania’s work has been highlighted on NBC, ABC, CBS, and FOX, and she has been featured in the Chicago Tribune, Southern Writers Magazine, and Chicago Entrepreneurs Magazine (selected as the #8 Top Chicago Author in 2021). The Windy City Nights series is going to the moon in 2022, as part of the Writers on the Moon project.

Dania’s novels are available at Amazon, Barnes & Noble, Kobo, Smashwords, and iTunes. When she’s not writing, you can find Dania at a sporting event, a rock concert, or at the movies (usually a comedy).

Q: Hi Dania! Can you tell us a little more about yourself?

DV: On my honeymoon, my husband and I spent 3 amazing weeks in Italy and Greece touring various cities and enjoying the culture. It was the trip of a lifetime. We’re looking forward to more trips to Europe in the future. My husband was in the US Navy submarine service (before we met). I’m very proud and grateful for his service and sacrifice for our country.

Q: Tell us about your heroine. What inspired her quirks and struggles?

DV: Harper is a wonderful woman, smart, kind, loyal but she’s been hurt and betrayed by those she should have been able to trust the most. This has made her unsure of herself and afraid for far too long. Spencer, our hero, helps her shed those fears so she can live her best life.

Q: Tell us about your hero. What motivates him?

DV: Spencer works hard and would do anything for his family. He feels that he has a lot to prove after his grandfather turns over ownership of the family business to him, rather than his own children. He enjoys his work – but is all work/no play, and very lonely. Harper brings much needed sunshine (and snarky quips) into his life.

Q: If your book was made into a movie, who would star in it?

Q: What was the highlight of writing this book?

DV: Ask Me Nicely is my first independently published book. It’s been exciting but nerve wracking too. I had a wonderful time working with my pal and cover artist on the cover. I thinks she hit it out of the ballpark.

Q: What is a typical writing day like for you? What inspires you?

DV: I have a full-time job (but am a teleworker, thank goodness), so I get writing time in the morning before I log into my corporate network environment. I can usually sneak in some writing time during the day if there aren’t too many work related demands on my time and evenings and weekends. It can be challenging, but I make it work and get the words written as fast as I can.

Inspiration can come from so many places – song lyrics, dreams, news, watching television or movies, fragments of other people’s conversations, reading fiction or non-fiction. Story ideas are all around me! If only I had more time! Love is inspirational to me, so I want to share as much of it as I can.

DV: I want to write the next story in my Sinful Seduction series. Andrew was the recent debut, next up will be a story for Andrew’s younger brother Simon. I’m also very excited to be part of a Paranormal Romance/Urban Fantasy rejected mates anthology called Rejected Mates. It’ll be my first paranormal/shifter story called Leopold and if I write it correctly, a bit of a shifter rom com. Rejected Mates releases on 9/6.

This Or That Questions:

Coke or Pepsi? – Diet Coke (and an occasional Diet Dr. Pepper)
Book or Movie? – Why choose? I love to read, but also love movies (preferably comedies).
Morning or Night? – I’m a definite morning person.
Shower or Bath? – Bath in my jetted tub  🙂
Print or Ebook? – If I had the space, I’d love many bookcases filled with print books.
Summer or Winter? – Summer (and Fall)

Did you get your copy of Ask Me Nicely by Dania Voss? Let us know your thoughts in the comments below. 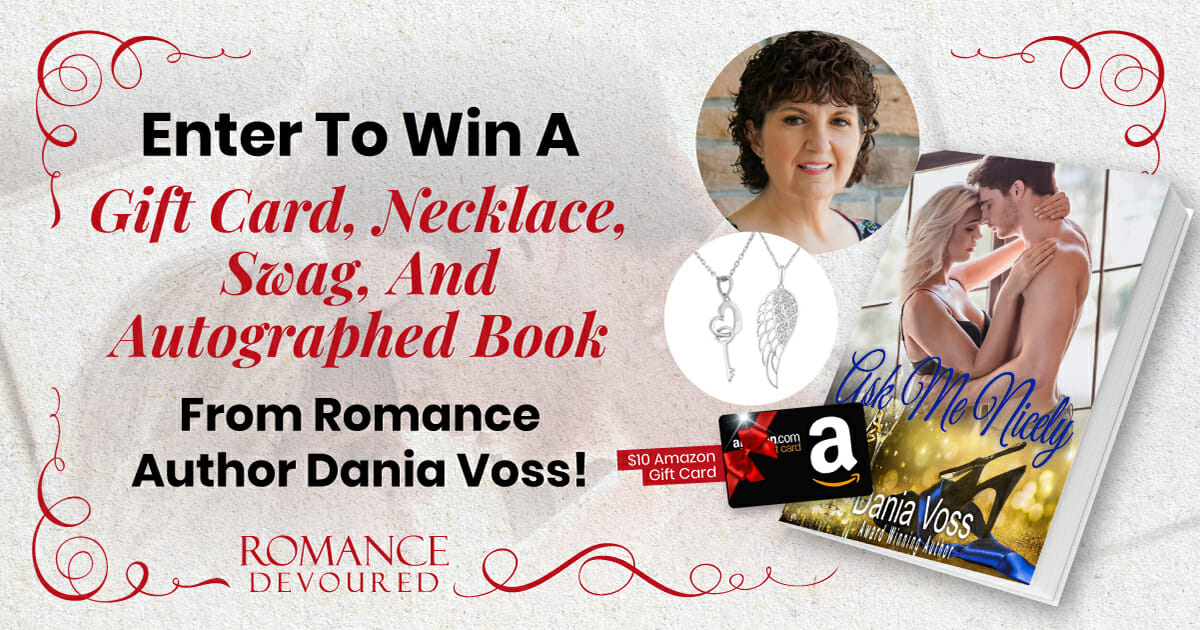