About The Summer I Turned Pretty Show

The Summer I Turned Pretty show aired as an Amazon Prime Video exclusive on June 16th 2022. Let’s take a look at everything you’ll need to know before getting stuck into this gripping summer drama! Don’t worry, we’ll keep the spoilers to a minimum.

What Is The Summer I Turned Pretty?

The Summer I Turned Pretty show is an Amazon Prime Video exclusive series. The series is directed by Erica Dunton (3 episodes), Jeff Chan (2 episodes), and Jesse Pertex (2 episodes). Erica Dunton has a long director history and is no stranger to the field. She is credited for directing the Peacock exclusive Vampire Academy which is still in production.
Jeff Chan co-wrote and co-directed the award-winning 2019 movie Plus One.
The most accredited name on the list of directors being Primetime Emmy nominee and Grammy award winner Jesse Peretz. With hits such as Netflix’s GLOW, Netflix’s Orange Is The New Black, alongside Nurse Jackie, The Office, New Girl, and many more – we have high hopes for his expertise to drive The Summer I Turned Pretty into the limelight! (He also directed the music video for Selena Gomez’ Bad Liar – the vibe seems perfect for The Summer I Turned Pretty, right?)

Based on the first book of the trilogy of the same name, New York Times Bestselling Author Jenny Han had hands-on involvement in the book-to-film adaption. She is credited with the creation of the series, as well as co-creating the teleplay of several episodes. When the creator gets involved, it’s a good sign that the adaption will stay true to the original medium.

In The Summer I Turned Pretty show, we follow Belly through her summer in the fictional town of Cousins Beach. This town actually exists in Wilmington, North Carolina where many scenes were shot. There, she has life-long friends Conrad and Jerimiah Fisher. As her childhood is slowly merging into adulthood, she gets thrown into a complicated love triangle and has to figure out in who her true feelings lie.

With almost 1,500 reviews clocking in at 4.5-star rating, we have no doubts that we’ll be hearing news of a second season soon!

Season 1 was released on June 16th 2022 (June 17 for the UK). Sadly, we have no news of whether or not The Summer I Turned Pretty season 2 or 3 is on the horizon. But worry not! We’ll be sure to keep you updated, so make sure to keep checking back for the latest information!

Check Out the Official Trailer!

Did you recognise a familiar song in the trailer? All the Swifties out there will be thrilled to hear that not one, not two, but five Taylor Swift songs feature in this series!

With a sensible 7 episodes, each clocking in at roughly 45minutes – this show is seriously bingeable! We’ll give you a little oversight to each episode now, so you can really anticipate all that’s heading your way.

1. Summer House: It’s the first real day of summer: the day Belly, her brother Steven, and her mother Laurel head to Cousins beach to stay with Susannah Fisher, who’s like Belly’s second mother, and her boys, Conrad and Jeremiah. Belly’s been going to Cousins since she before was born, but something about this summer feels different for Belly. And if the first night is any indication, she’s right.

2. Summer Dress: It’s Belly’s first day as a debutante, and a day of shopping and tea parties make her wonder if she made the right choice when she checked yes on Susannah’s invitation. But when Cam shows up, things turn around for Belly. Her summer of firsts is just getting started. Meanwhile, Steven’s having his own summer of romance, and Laurel is intrigued by a fellow author.

3. Summer Nights: It’s Belly’s 16th birthday and her best friend, Taylor, arrives in Cousins to help celebrate. Belly’s birthday is always her favourite day of the year, but this year she’s blindsided by a secret Taylor has been keeping from her. The debs ask Belly who she’s bringing to the debutante ball. Laurel and Susannah’s secret finally comes to light.

4. Summer Heat: It’s the 4th of July, and the fathers have come to Cousins for Susannah’s annual party at the beach house. Tensions flare between Conrad and his father. Belly and the Fisher brothers make margaritas, and chaos ensues. Later, Belly has a romantic moment that’s interrupted.

5. Summer Catch: Believing that Conrad might act on his feelings for her, Belly makes a decision. But when Belly and Conrad finally get a chance to talk, things don’t go as she expected, and she wonders if she’s had her eye on the wrong Fisher brother. Steven is assigned to work the poker room at the country club, and Laurel and Susannah have a night out.

6. Summer Tides: Taylor comes back to town to play in the Cousins Beach charity volleyball tournament, and to help Belly, who’s caught between Conrad and Jeremiah. When a yacht party with the debs ends in disaster, Belly’s decision between the brothers becomes clear. Steven finds himself in over his head with Shayla’s wealthy friends, and Cleveland helps Conrad through an emotional moment.

7. Summer Love: The debutante ball is here, but Belly’s big night is almost ruined when Jeremiah learns the secret his mother has been keeping all summer. When Belly’s left alone on the dance floor, someone else steps in to save the day. With Susannah and Laurel’s secret out in the open, the season ends with a promise from Susannah and the confession from Conrad that Belly has been waiting for all summer.

The Summer I Turned Pretty show boasts a large cast of some undiscovered talents. We’re thrilled to see them take the center stage and bring such a beloved series to life! Check them out.

From left to right…

Most are relatively new faces to the acting scene. David Iacono boasts some small roles in The Good Doctor and NCIS. While Casalegno has a regular spot on the CW’s Walker as Trevor Stand, where he works alongside well-renowned actor Jarad Padalecki.
We’re excited to see all these new and experienced faces alike on The Summer I Turned Pretty show!

Differences Between The Summer I Turned Pretty Book and the Show

People who read the book series might be thinking, “Well, I’ve read the book, is there any point in watching The Summer I Turned Pretty show?” The answer is: Yes, Yes Yes!
The show has changed a lot of details in order for its on-screen adaption to be as in-depth as it deserves to be. None of these changes are storyline-destroying, but they add a certain extra layer of nuance to the show. Additionally, this means that even those who have read the series can enjoy a bunch of extras! Lets list some changes, shall we?

This might be a big shock – as the debutante ball is such a pivotal point in The Summer I Turned Pretty show. The ball wasn’t in the books at all! When asked about the decision to add such a huge plot point into the show, Han said “I think different cultures have many different ways of marking that moment of between, like, girlhood and adulthood… And that’s what Deb Ball is, you’re coming out and being seen as an adult.”
The Summer I Turned Pretty is all about the awkward stage between childhood and adulthood, so we think this is perfect!

That’s right! In the book, there is nothing to suggest that Jerimiah is a member of the LGBTQ community at all! In the show, Jerimiah is stated to have had boyfriends in the past and he also makes out with a boy on screen at a party. Given that Jerimiah is a comfortable character who is the polar opposite of his brother in the sense that he is much more at ease with himself – this only makes sense. Not to mention a lot has changed since the book’s release in 2009. Jerimiah’s character is more relatable to people than ever, since the majority of the show’s teenage demographic understand sexuality as a fluid spectrum.

These are the changes we love to see!

The Book is a Lot More PG

The book series was rated a safe 12+ but the TV show adaption is currently rated 16+. In the show, there’s a lot more booze and Conrad smokes weed as well as cigarettes. Belly makes fun of him for it, since he used to judge stoners. Not to mention, the show has a lot more kissing than the book did, and the kissing scenes happen a lot sooner than that of the book. But hey, when in Rome!

Laurel Isn’t An Author in the Book

With the relationship between Belly and Laurel being very important in the book, and later on in the book series, it only makes sense that Laurel’s character was given a little more care and attention. In the show, we see not only her as a side character in Belly’s life, but we see her own struggles as an author and we can watch how she develops with the help of another new addition to the show, Cleveland. We also get much more of a glimpse into her and Susannah’s friendship, which is heartwarming to witness.

Is The Summer I Turned Pretty show based on all three books?

The show currently is only based on the first book, so we can expect that books two and three will be covered in the following seasons. These have not yet been announced, but keep checking back and we’ll keep you updated!

Is The Summer I Turned Pretty show on Netflix?

The Summer I Turned Pretty is available on Amazon Prime Video.

Does The Summer I Turned Pretty Show Cost Money?

You’ll need an Amazon Prime membership to watch the show. If you haven’t already, you can sign up to a free trial or if you are a student, Amazon has a range of offers available for its Prime membership!

Is The Summer I Turned Pretty Show diverse?

The show has made an effort to improve its diversity and changed a lot of characters to do so. Many characters have been adapted with different ethnicities and races, and there are issues of racism brought up with respect and nuance in the show. There are several LGBTQ characters who have stolen our hearts too! We believe this show does a great job of accurately representing the diversity in modern America!

Did you enjoy the show? Let us know! 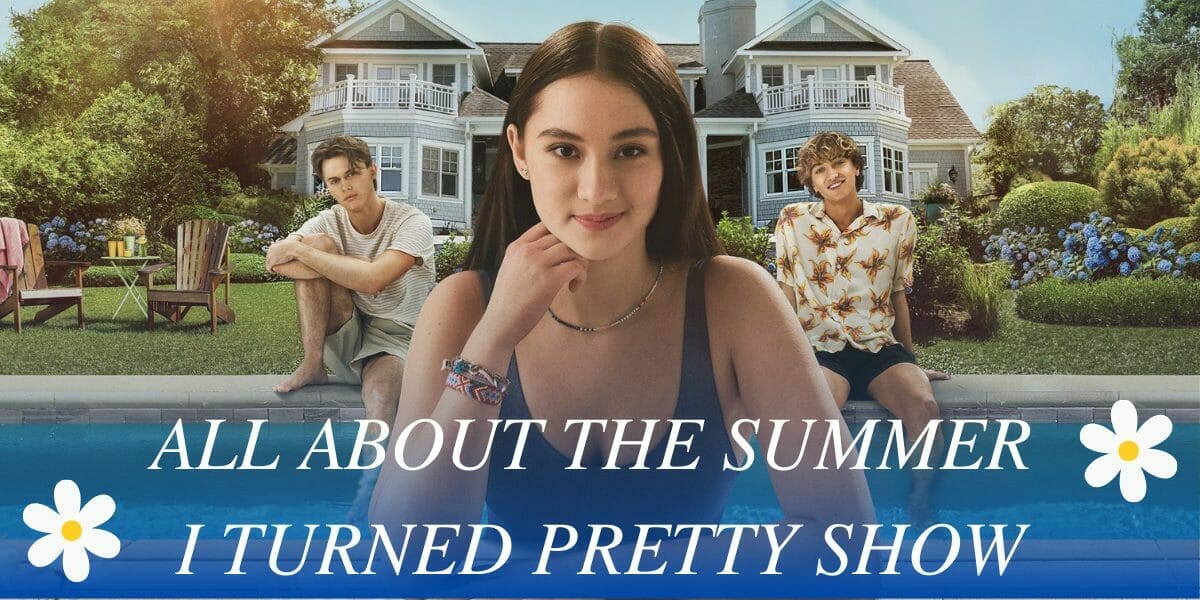