Since there’s a movie starring Viola Davis and Julia Roberts coming out at some point, we thought it would be a great time to read Small Great Things by Jodi Picoult. Small Great Things tackles race, privilege, prejudice, justice, and compassion, which Picoult does with ‘incredible empathy, intelligence, and candor‘. So we just had to give it a read! Check out our thoughts now.

Ruth Jefferson is a labor and delivery nurse at a Connecticut hospital with more than twenty years’ experience. During her shift, Ruth begins a routine checkup on a newborn, only to find that she’s been reassigned to another patient. The parents are white supremacists and don’t want Ruth, who is African American, to touch their child. But then the baby goes into cardiac distress whilst Ruth is alone in the nursery.

Ruth Jefferson is a labor and delivery (L&D) nurse. And she has been for twenty years. Initially, we are told the story of many other patients that Ruth helped to deliver their children, showing just what a great nurse she is. She is also a mother to Edison, who made the Highest Honors list for every semester of his high school career.

We are also introduced to Ruth’s past. Her mother worked as a maid for a rich, white family – The Hallowells. Ms Mina gave birth unexpectedly at home and Ruth’s mother was there to help her deliver. The children watching – Christina (Mina’s daughter), Adisa (Ruth’s sister who at the time went by the name Rachel before she legally changed it), and Ruth – were each affected differently by this event. Christina had her baby via surrogate, Adisa had five children and Ruth became a L&D nurse.

Back to the present, and a new couple come into the hospital where Ruth works. The mother Brittany gave birth the night before with a different nurse and Ruth is sent to assess the baby in the morning. Ruth does her job, finding that the baby has a heart murmur, which she notes to refer to the paediatrician. Once Ruth has finished her examination she finds that there is a problem – the parents of little Davis (named after the last president of the confederacy) are extremely racist white supremacists and have a problem with Ruth touching their child.

So, after Ruth’s assessment, they make a complaint. Afterwards Ruth is instructed by her superior to not touch the baby again. And a note to this effect is put on the baby’s file, that no African American personnel are to care for the child. Understandably Ruth is devastated both by the actions of the racist parents and her supervisor for allowing them to make this discriminatory decision without being challenged. But Ruth has no choice but to continue doing her job and obey the order.

Then, on a busy day, Ruth is left to keep an eye on Davis after his routine circumcision when the nurse in charge of him gets called into an emergency birth and there are no other nurses available. Which is when he goes into cardiac distress. Ruth hesitates before helping – should she disobey orders or should she help? Her first nursing instincts are to help and she begins to check the baby’s vitals but when she hears someone coming she steps back and pretends that she did nothing. Ruth’s supervisor Marnie bursts in and tells Ruth to help as they try to perform CPR. Soon the room is filled with activity as the doctors rush in and everyone tries to save the baby’s life. But it is to no avail and tragically the baby Davis cannot be saved.

Davis’ parents look for someone to blame and of course the target of their prejudiced hate is Ruth. Now Ruth is being charged with murder and she needs to rely on public defender Kennedy McQuarrie to prove her innocence.

Picoult’s writing never fails to impress us. She keeps us hooked all the way to the end, it’s almost impossible to put any of her books down. The very same applies to Small Great Things.

Small Great Things is told from the perspective of Ruth, Kennedy and the despicable Turk Bauer. All of the characters are very well written, even Turk. Picoult gives a detailed reason for the way he is, but it is not given as a way to excuse to behaviour. Turk is an angry racist, homophobic man with offensive tattoos. He regularly launches physical attacks on gay people or people of colour just as an outlet of his anger. His wife, Brittany is equally as abhorrent, often encouraging and joining in with the violence, she is also abusive to animals.

Ruth has worked hard all her life to get to where she is as a respected nurse. She is bringing up her son alone after her husband was killed in service. Edison is an exemplary young man, who does well in school and is in the process of applying to colleges. The two are very close and despite the struggles they face they are doing well until the court case blows up and threatens to send Edison off the rails.

Kennedy McQuarrie is a public defender who is married with a small child. Ruth’s case is her first murder trial and one which she is determined to win. Kennedy is convinced that she herself is not racist at all. From the off she tells Ruth that the case can’t be made about race as they will never win if they go down that route. Ruth reluctantly agrees because more than anything she wants to be there for her son.

But as the trial goes on Ruth shows Kennedy what it’s like to walk in her shoes. What exactly life is like for an African American living in America. Slowly Kennedy’s eyes are opened to the passive racism that occurs every day.

This is an excellently written book and it becomes engrossing as the trial continues towards it’s verdict. We wonder how many eyes will be opened and is there even redemption available for some of the worst characters in this book or do they even deserve it? This is a book that certainly makes you think, question yourself and it stays with you long after you have finished it.

“If I cannot do great things, I can do small things in a great way.” Martin Luther King, Jr.

What did you think of Small Great Things by Jodi Picoult? Let us know! 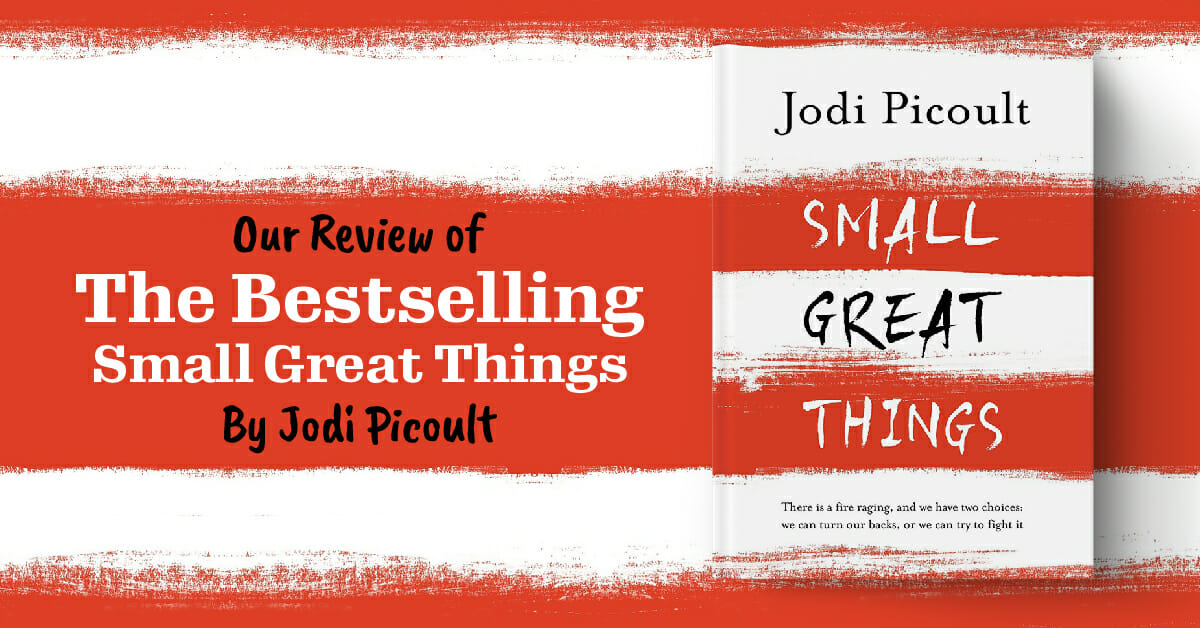