Our Review Of Wish You Were Here Jodi Picoult

Wish You Were Here Jodi Picoult is a “powerfully evocative story of resilience and the triumph of the human spirit”. And with the rights sold to Netflix for adaptation as a feature film, there’s no better time to read it than now!

Wish You Were Here

Diana O’Toole is perfectly on track. She will be married by thirty, have kids by thirty-five and move out to the New York City suburbs, all whilst climbing the ladder in the cutthroat art auction world. She’s sure that her boyfriend Finn will propose on their romantic getaway to the Galápagos. Until a virus that felt worlds away appeared in the city. And now Finn needs to stay to work at the hospital.

Diana O’Toole is perfectly on track. She will be married by thirty, done having kids by thirty-five, and move out to the New York City suburbs, all while climbing the professional ladder in the cutthroat art auction world. She’s an associate specialist at Sotheby’s now, but her boss has hinted at a promotion if she can close a deal with a high-profile client. She’s not engaged just yet, but she knows her boyfriend, Finn, a surgical resident, is about to propose on their romantic getaway to the Galápagos—days before her thirtieth birthday. Right on time.

But then a virus that felt worlds away has appeared in the city, and on the eve of their departure, Finn breaks the news: It’s all hands on deck at the hospital. He has to stay behind. You should still go, he assures her, since it would be a shame for all of their nonrefundable trip to go to waste. And so, reluctantly, she goes.

Almost immediately, Diana’s dream vacation goes awry. Her luggage is lost, the Wi-Fi is nearly nonexistent, and the hotel they’d booked is shut down due to the pandemic. In fact, the whole island is now under quarantine, and she is stranded until the borders reopen. Completely isolated, she must venture beyond her comfort zone. Slowly, she carves out a connection with a local family when a teenager with a secret opens up to Diana, despite her father’s suspicion of outsiders.

In the Galápagos Islands, where Darwin’s theory of evolution by natural selection was formed, Diana finds herself examining her relationships, her choices, and herself—and wondering if when she goes home, she too will have evolved into someone completely different.

When we first meet Diane she has her life on track. Her life plan is well laid out – she wants to be married by thirty, have children by thirty-five, all the while climbing the career ladder in the art world. At the beginning of Wish You Were Here all of this is going as planned for Diane. She is almost thirty and is living with her boyfriend Finn. They have a dream vacation to the Galápagos Islands upcoming and Diane found a ring stuffed in the back of Finn’s drawers so she is fully expecting him to propose on their holiday so that box is ticked. She is working as an associate specialist at Sotheby’s and has just snagged a huge client for them so things are looking on track for her career plans too.

When talk begins of a new virus it is only at the peripheral of Diane’s world. She doesn’t think it’s going to be a big deal and she doesn’t think it will affect her. Much like the rest of the world in the very early stages of the pandemic Diane doesn’t see cause for alarm. But things begin to change. At first there are only a few people getting sick and in the hospitals but it doesn’t take long for alarm bells to start ringing. The streets begin to empty, the world begins to slow as fear takes over.

With days to go until thier dream vacation is due to begin Finn tells her that he can’t go with her. He is a resident surgeon at the hospital but before long it is all hands on deck. And though Finn is a surgeon is assigned to the fast filling covid wards. Finn knows that he can’t leave the hospital for a vacation but he tells Diane that she should still go. He tells her that it would be a shame to waste the trip as they won’t be able to get a refund. He also says it will be safer for her because he worries that he may bring the virus home to her.

Diane is reluctant at first but she agrees to go without Finn. It doesn’t take long for things to go wrong, Diane’s luggage goes missing on the flight and as she arrives on the boat to the Isabela Island in the Galápagos she learns that the Island is shutting down due to the covid pandemic. She has a moment to make a decision – should she return straight back on the boat that she just arrived on or should she stay? For once in her life Diane decides not to take the safe option and she chooses to stay.

It isn’t long before Diane is regretting her decision. The hotel she was booked into has shut down and Wi-Fi is almost non existent on the Island. Diane finds herself alone with no luggage and no place to stay. With the Island on shutdown and in quarantine until the borders reopen Diane has no where to go. She is filled with panic until she meets an elderly lady, Abuela, who offers her a place to stay. Diane gratefully takes her up on the offer.

Making the most of her time on the Island Diane begins to explore when she can, before curfew locks everyone down each day. One day whilst swimming by the beach she finds a young teenage girl who is cutting herself. Full of concern Diane tries to reach out but the girl shuts down. Diane also has an unsettling expreicne with a gruff, seemingly angry local man.

It isn’t long before Diane finds that both the young girl, Beatriz and the angry man, Gabriel are related to the kind lady who took her in. Gabriel is a single father to Beatriz and Abuela is his mother. In her time stranded Diane begins to connect with the family.

But with the Wi-Fi being sporadic Diane finds it difficult to keep in touch with home. When she does manage to get a connection then emails pour in from Finn. He uses the emails to Diane as a sounding board, telling her of the effects the pandemic is having back home. He tells her of his long days, of the dying and desperate patients that they try to save. And he talks of the new treatments that they are finding and trialing.

It is a world that seems so far away to Diane in her peaceful haven. Although she misses Finn and worries about the tough time he is having Diane finds herself blending into the Galápagos life and begins to feel less like a tourist as she spends more time with Beatriz and Gabriel. She begins to bond with both of them. And the longer Diane spends on the Galápagos the more she begins to question her carefully planned out life. Is marriage and children with Finn what she really wants. And also, is an art seller what she wants to be when her true love is really in the creation of art.

Diane is faced with doubt over things she was sure of and she needs to find the answers before her time on the Island comes to an end.

Jodi Picoult does an amazing job of painting exactly what it was like in the early days of the covid pandemic. It’s not that long ago to us right now but even then it feels like a world away. But this is what we saw on the news or maybe some of us were unfortunate enough to experience it first hand.

In contrast to Finn’s story we have Diane finding her way in the Galápagos. After a terrible start to her holiday we watch as Diane bonds with Beatriz and Gabrielle. In contrast to the very real horrors described in Finn’s story the Galápagos Islands are described in beautiful detail. Although it may seem that this is a book about the covid pandemic it is really a book about choices, especially difficult ones. Diane is torn when she begins to find that maybe what she thought she always wanted isn’t actually what she wanted at all. Ultimately this book shows how during times of crisis perspective can be found and sometimes you have to do what’s right, not what is safe.

What is Jodi Picoult Wish You Were Here about?

Wish You Were Here is about the start of the covid-19 pandemic but that’s not all it’s about. It is also a book about self discovery and perspective.

Is I Wish You Were Here a true story?

Wish You Were Here isn’t a true story but it is inspired by real life events. Jodi Picoult heard about a man who had become stranded at Machu Pichu during the covid pandemic and much like Diane he blended into the community until he started to feel less like a tourist. Jodi Picoult decided to shift her story to the Galápagos, as it was an area she felt she knew better.

Is it Gabriel at the end of Wish You Were Here?

If it is Gabriel at the end of Wish You Were Here is very much up to the reader’s perspective but we think that it was Gabriel!

What was Jodi Picoult’s first book?

Jodi Picoult’s first book is Song Of The Humpback Whale. It was released in 1992 and it tells the story of Jane Jones who has lived in the shadow of her husband, renowned San Diego oceanographer Oliver Jones, for years. But during an argument, Jane turns on him and leaves with their teenage daughter, Rebecca, for a cross-country odyssey charted by letters from her brother Joley.

Is there a sequel to Wish You Were Here?

No there isn’t currently a sequel to Wish You Were Here, it is a standalone title. 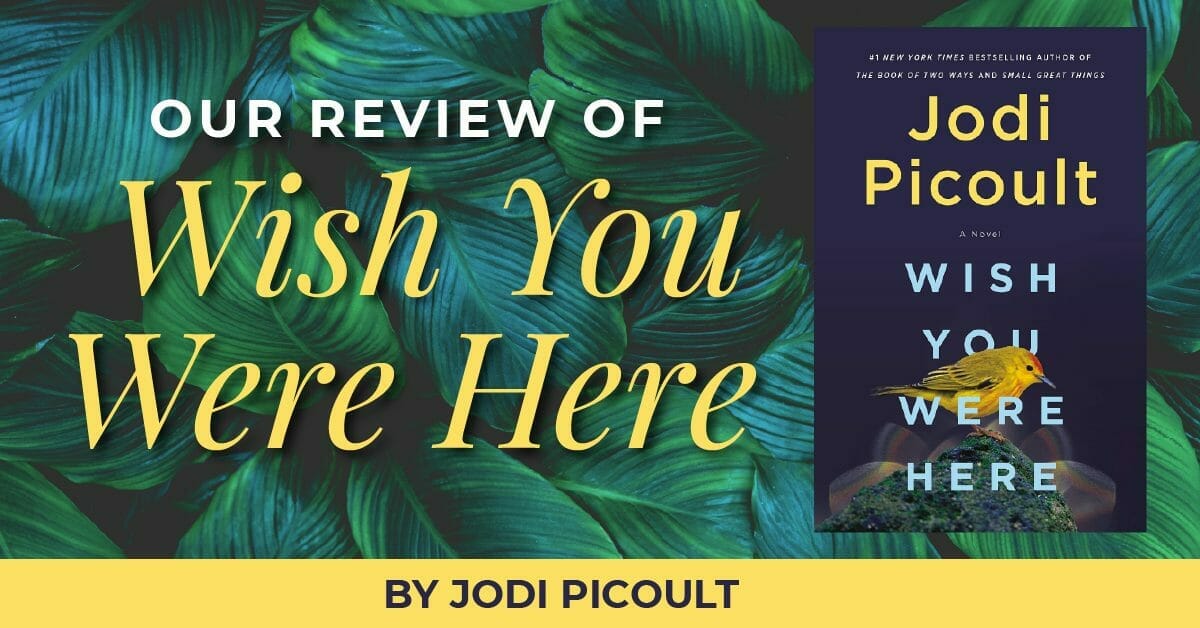