Nora Roberts Year One is about a pandemic, which feels all a bit too real in a COVID world. Some of the descriptions about the attempt at preventing the spread of The Doom especially ring true. So, because of how relevant a book like this is nowadays, we just had to give it a read. And here is what we thought of Nora Roberts Year One!

What Would You Rate Year One?

Nora Roberts Year One (Chronicles of The One Book 1)

A deadly pandemic – called The Doom – causes the death of billions, but some survivors find themselves with magical powers. Lana can move things and people with her will. Fred can summon light. Jonah can see the future when he touches someone. Kate suspects that she’s brought new magic into the world with her twins. But they still need to survive.

When Ross MacLeod pulled the trigger and brought down the pheasant, he had no way of knowing he’d killed himself. And billions of others.

In Dumfries, Scotland, Ross MacLeod is on an annual trip to the MacLeod Family farm. It was a place from his childhood that he would spend time with his brother Rob, and friend Hugh and his late brother Duncan.

Often, on dark nights, they’d crept out of the house to hike to the field – the same where they went hunting for that pheasant – to hold secret meetings and try to raise spirits within the little stone circle known as sgiath de solas, the shield of light. They’d never succeeded, but one night Ross swore that he felt a dark presence there. And felt a breath blow into him. He ran out of the circle and scraped his hand on a stone. A single drop of blood struck the ground.

Their annual visit began on Boxing Day and ended on the second of January. The men would bring their wives and children to the farm where they grew up. Only Ross’ daughter – Katie – who was pregnant with twins didn’t go.

Ross shot the pheasant. The hand that he had cut on the stone all those years ago throbbed as he pulled the trigger. Crows circled the stones, not leaving when the pheasant dropped to the ground. They took the pheasant back to the farm and enjoyed a New Years feast.

Then Ross fell ill. They thought it was just a normal illness, but it wasn’t. It would be soon known as The Doom. As Ross and his wife Angie travelled home, they infected more people. The rental car clerk and businessman who would rent the car next. The porter who took their bags. And by the time they reached security, they had already infected two dozen people.

It went on. More people got infected. And Ross was Patient Zero, the first victim claimed by The Doom. The death count reached a million in a week. Nothing could stop it spreading. The mortality rate is 100% in the infected. The world descends into chaos.

And those who don’t die? They get magical powers.

Year One follows the couple Max and Lana, Jonah and Katie with her twins, Fred and Arlys as they try to survive in an apocalyptic world after losing so much.

One standout point from Year One is Nora Roberts’ excellent style of writing. She keeps you hooked from the beginning, waiting anxiously each page to find out what happens next. And she has built-up a world that is so real you can easily imagine how it looks. You find yourself caring a lot for the characters, willing them to survive through all the hardships that this world throws at them.

Everything about Year One is why we love Nora Roberts. The amazing characters, the exciting story, and the fact that we could not put down this book no matter how hard we tried. It really showcases the talents that she has as an author.

Although, Year One is slightly lacking in the romance aspect. There are couples in there – like Lana and Max (and we adored them so much, we were cheering them on the whole time) – but classing this as a straight up romance book may not be totally accurate. However, even though we love romance (DUH!), we still think that this book is worth the read regardless.

From the very first chapter when Nora describes how The Doom began and we watch as it spreads from people innocently going around their day to day business this book is compelling. The world Nora builds from here is believable with her expertise as the survivors fight to find their way in this new world. Some by grouping together and others by turning on each other and to violence, showcasing every aspect of human nature and how people can react to disaster.

One thing that slightly irked me when reading this book is how easy it seems to be for them to find food, shelter, etc. And the fact that they still have electricity and running water. But we don’t really worry too much about the little things. So, since we loved the rest of the book, we think that this is forgivable and as long as you don’t question it too much then it isn’t too distracting.

To sum up, despite the slight lack of romance (and it’s only slight – there’s enough romance to give us our daily fix), Year One is still an amazingly written book with a great world and characters that we just love and a large sprinkling of magic. So, what are you waiting for? Read it yourself now!

This is the first book in the Chronicles Of The One series and you better believe this is one series that we will be continuing!

Did you enjoy Nora Roberts Year One? Let us know your thoughts! 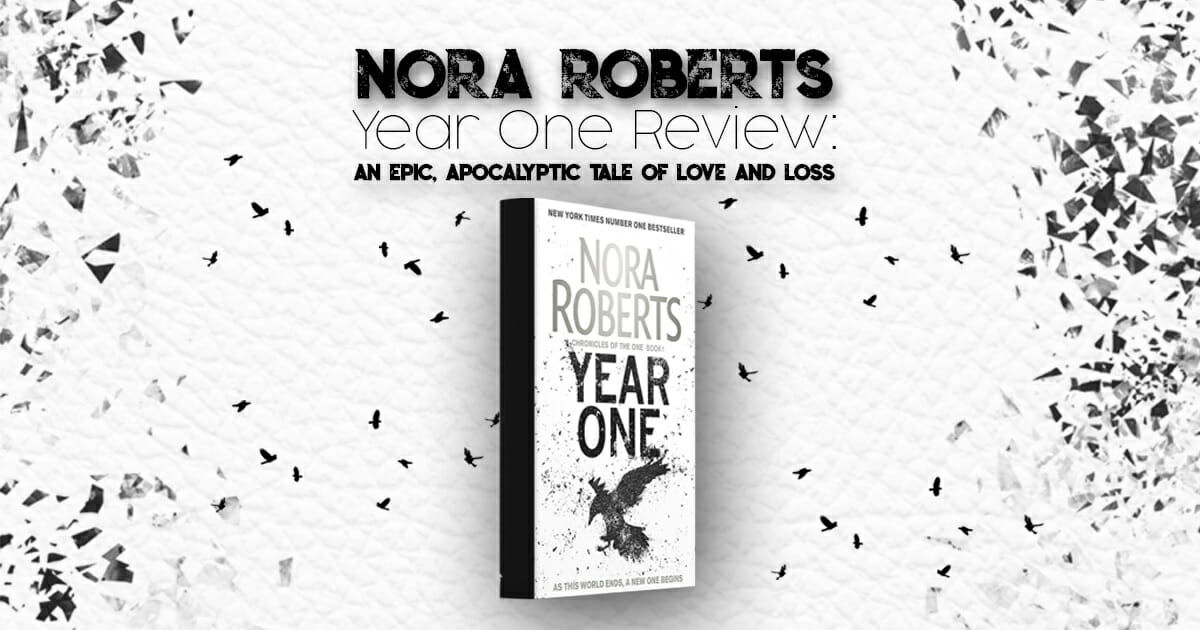