Nora Roberts is the #1 New York Times bestselling author of more than 225 novels with a career spanning over 40 years. We can always count on several releases each year from author Nora Roberts and this year is no exception. Nightwork is the first title from Nora out this year, check out the details about this new romantic suspense below!

Harry Booth started stealing at nine to keep a roof over his ailing mother’s head, slipping into luxurious, empty homes at night to find things he could trade for cash. When his mother finally succumbed to cancer, he left Chicago but kept up his nightwork. He dons new identities and stays careful, observant, and distant. But he can’t help letting his guard down when he meets Miranda Emerson.

‘If you’re after the perfect pick-me-up, take-me-away-from-the-world read, then she’s your woman’
The Guardian

When he was nine, and his mother had her first deadly dance with cancer, Harry became a thief. Someone had to find food and pay the mortgage even if his mother was too sick to work. When his mother finally succumbs to cancer, Harry leaves Chicago but somehow he can’t quite leave all of his past behind.

Harry lives a quiet, careful, rootless life – he can’t afford to attract attention or get attached – until he meets Miranda. But just when Harry thinks he has a chance at happiness his old life comes back to haunt him. Harry has had dealings with some bad people in his past but none more dangerous than Carter LaPorte and Harry is forced to run. But no matter what name he uses or where he goes, Harry cannot escape. If he is ever going to feel safe Harry must face down his enemy once and for all.

Only then can he hope to possess something more valuable than anything he has ever stolen.

The latest book from Nora Roberts is called Nightwork, it was released on May 24 2022.

Will there be a third book in the Dragon Heart series by Nora Roberts?

Will there be a sequel to Nora Roberts The Awakening?

Yes, there is already a sequel to The Awakening Out. Dragon Heart Series Book 2 is called The Becoming and it was released on November 23 2021.

Yes, Nora Roberts is still writing books. Her latest release is Nightworks which was published on May 24 2022. Her next release will be The Choice (Dragon Heart Legacy Book 3) on November 22 2022. Nora Roberts is also still releasing books as JD Robb, the next being Despartation In Death on September 6 2022.

Does Nora Roberts have a new trilogy?

Yes, Nora Roberts does have a new trilogy. It is called the Dragon Heart Series, book 1 The Awakening and book 2 The Becoming are already released. Book 3 The Choice will be released on November 22 2022.

Are you excited for Nora Roberts’ new book Nightworks? Let us know!

A new epic of love and war among gods and humans, from the #1 New York Times bestselling author of The Awakening.

Breen Siobhan Kelly has just returned to Talamh, with her friend, Marco, who is dazzled and disoriented by this realm.  A place filled with dragons and faeries and mermaids.  In Talamh, Breen is not the ordinary young schoolteacher he knew her as. Here she is learning to embrace the powers of her true identity. Marco is welcomed kindly by her people—and by Keegan, leader of the Fey. Keegan has trained Breen as a warrior.  And his yearning for her has grown.

But one member of Breen’s bloodline is not there to embrace her. Her grandfather, the outcast god Odran, plots to destroy Talamh.  And now all must unite to defeat his dark forces. There will be losses and sorrows, betrayal and bloodshed. But through it, Breen Siobhan Kelly will take the next step on the journey to becoming all that she was born to be. 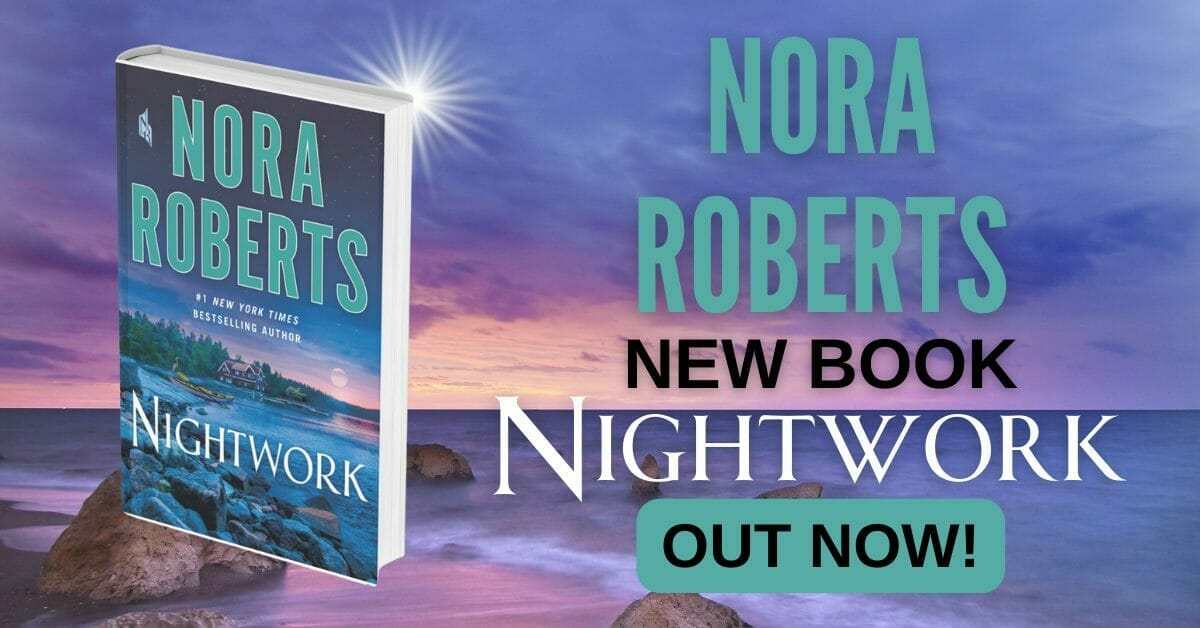