Most of these amazing new TV shows that will be released in 2022 are continuations of our favorite romantic series. Bridgerton, Virgin River, and Firefly Lane are just a few examples that we are so excited about! Obviously, we are counting down the days already. Since these shows are going to be on everyone’s mind next year, make sure you’re all caught up on the previous seasons so you can start the second the new season drops. 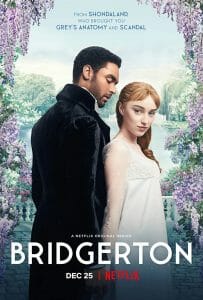 Bridgerton has really blown up since the release of the Netflix TV show. And it all started with the 9 book series from Julia Quinn. They are saucy and steamy period romps which follow 8 close knit siblings seeking love in high society London in the Regency Era. Then the book series was commissioned for a Netflix TV Series which premiered on December 25, 2020. The TV show proved to be just as sexy as the book series. And of course we were all taken with a certain Duke, played by Regé-Jean Page.

The eight-episode first season was an instant hit and met with gushing positive reviews. It has since become the most watched series on Netflix with a viewership of 82 million household. As a result, the series reached No. 1 in 76 countries. To everyone’s relief in January 2021, the series was renewed for a second season. Whilst there were initial hopes that the series would be released in 2021 it has been pushed back to 2022.  Although we don’t have an official release date yet. But filming started in May 2021 and the series entered into post production in the summer. So hopefully we won’t have to wait too long into 2022 to get our Bridgerton fix! HUGE UPDATE: There was a big announcement on Christmas day – Bridgerton series 2 will arrive on March 25 2022. So mark your calendars!

As series one follows book 1 it is expected that series 2 will follow book 2 in Julia Quinn’s series, The Viscount Who Loved Me, which focuses on the romance between Anthony and Kate.

Many of the cast of season one are returning: Nicola Coughlan, Jonathan Bailey (Anthony Bridgerton), Luke Newton, Claudia Jessie, Luke Thompson, Ruth Gemmell, Polly Walker,  Adjoa Andoh, Golda Rosheuvel and Ruby Barker are series one cast members that are expected to return (sadly no Regé-Jean Page this series as his character arc concluded in series one).  New additions to the cast are Simone Ashley as Kate Sharma and Charithra Chandran will play Edwina Sharma.

Virgin River follows Melinda ‘Mel’ Monroe, the protagonist of the first book. She answers an ad to work as a nurse practitioner and midwife in the remote Virgin River town. Thinking it will be the chance of a fresh start and the opportunity to leave her painful memories behind. But it’s not quite what she expected.

Virgin River Series 3 was only released in July 2021 but it looks like we won’t have to wait long for Series 4!  Although we don’t have a release date as yet the series is already in post production so hopefully we should be seeing it sometime early 2022!

Catch up on the rest of the seasons now! Click Here!

There’s no official trailer available as yet but you can find out lots more info on the following video:

Sweet Magnolias is based on the book series of the same name from Sherryl Woods (who also brought us Chesapeake Shores).  Season 1 ended on a huge cliffhanger so we have been waiting eagerly for Season 2 to find out what happens next!!

The regular cast members are largely expected to return.  As a recap the season one cast consisted of JoAnna Garcia Swisher as Maddie, Heather Headley as Helen, Brooke Elliott as Dana Sue, Chris Klein as Bill, Justin Bruening as Cal, Carson Rowland as Tyler, Logan Allen as Kyle and Anneliese Judge as Annie.  Some of the supporting cast are also returning with more regular roles –  Jamie Lynn Spears as Noreen, Dion Johnstone as Erik and Brandon Quinn as Ronnie.  Sweet Magnolias Season 2 will air on Friday February 4. So we don’t have to wait too long thankfully!

There isn’t a season 2 trailer available yet. But if you haven’t caught up on season 1 as yet then you can check out the season one trailer here >>

We’ve already raved about Bridgerton but we are being spoilt next year as not only are we getting season 2 but we are also getting a Bridgerton spin off!  Entitled Queen Charlotte, with the focus of the show being the character that we already know and love from season one!  The mini series is a prequel so it will show us how Queen Charlotte became the person we see in the main show.  It has also been said that the spinoff will also tell the stories of young Violet Bridgerton and Lady Danbury.   Unfortunately filming hasn’t even started yet. No cast members have been announced either so information on the series is quite limited at the moment. Production is expected to start very early in 2022 so we are really hoping for a December Christmas treat here! Please don’t make us wait until 2023!

Firefly Lane is based on the book series of the same name from Kristin Hannah.  The first series starred Katherine Heigl and Sarah Chalke.  After the success of the first series Netflix announced in May that the show has been renewed for a second series.  Production is already well underway. There isn’t an official release date available yet the series should definitely be out in 2022.  The original cast is expected to return consisting of Katherine Heigl as Tully Hart, Ali Skovbye as Young Tully, Sarah Chalke as Kate Mularkey, Roan Curtis as Young Kate, Ben Lawson as Johnny Ryan, Beau Garrett as Cloud and Yael Yurman as Marah.  As this was another series that ended on a huge cliff hanger we hope we won’t be kept waiting long for season 2! 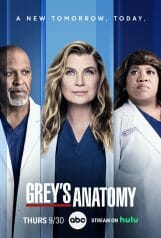 Already 18 seasons deep and the last season only aired on September 30 2021 but season 19 has already been confirmed. The show that follows medical trainees at the fictional Grey-Sloan Memorial Grey’s anatomy has been around for 18 years now, Typically a season is released once a year but it is still incredibly popular and as such the production company is sticking with it!  There is no release date as yet for season 19. We would expect it to be around the same time of year that season 18 was released (so early Fall of 2022 hopefully).

Love, Victor is inspired by and set in the same world as the 2018 film Love, Simon (which is based on the book Simon Vs The Homo Sapiens Agenda by Becky Albertalli).  Victor is a new student at Creekwood High School on his own journey of self-discovery. He’s facing challenges at home, adjusting to a new city and struggling with his sexual orientation. When it all seems too much, he reaches out to Simon to help him navigate his troubles at high school.  After season 2 aired it was confirmed that there would be a season 3. There aren’t any details available on release date or plot as yet. The cast of Michael Cimino, Rachel Hilson and Anthony Turpel are widely expected to return.

Watch the other seasons now by clicking here

Starring Brianne Howey, Antonia Gentry, Felix Mallard, Sara Waisglass Ginny & Georgia was hit for Netflix and it was soon announced that the series would be renewed for a second season.  The premise of the show is that  Ginny Miller is a 15-year-old girl who is more mature than her 30-year-old mother Georgia. In a New England town, Georgia decides to settle down with Ginny and her son Austin to give them a better life than she had.  (Fun Fact: Antonia Gentry, who plays Ginny, is actually 23; Brianna Howey, who plays Georgia, is actually 32.)  Although the series was confirmed way back in April 2021 production was delayed due to the Covid pandemic but filming is now underway.  There is no official release date as yet but we will be waiting impatiently for this one!

The hit TV show about a group of teens who whilst navigating the troubled waters of romance, school and family, become entangled in dark Riverdale mysteries.  With an ensemble cast featuring Lili Reinhart, K.J. Apa, Camila Mendes and Cole Sprouse the first 6 seasons have been fantastic.  While we don’t officially know if season 7 is actually happening yet. But it has revealed that the main four leads of the show have signed on for the next three years, which means their contracts will end with season 7.  So that means it’s coming back.  It is coming back, right??

This Is Us Season 6

This one is bittersweet as even though we know season 6 is definitely happening, it is going to be the last series.  So the beginning of the end is near.  No, I’m not crying, you are.  This Is Us is about a set of unique triplets and their amazing parents and all the struggles that they encounter in life.  The cast are all returning  – Mandy Moore, Milo Ventimiglia, Chrissy Metz, Sterling K. Brown, Justin Hartley, Susan Kelechi Watson and Chris Sullivan.  Season 6 will be 18 episodes long. It will begin airing on January 4 and it will air on Tuesdays (9 p.m. ET) on NBC. So that’s like really soon!  We can’t wait to find out what lies ahead for the Pearsons!

Which of these new TV shows are you most excited for? Let us know!

If you loved these, then check out: