Korean dramas – or simply K-drama – on Netflix are immensely popular both in Korea and worldwide. There are so many different genres and shows that it can be hard to find which one to watch next. So, we’ve done the research for you and compiled our top picks of our favorite Korean dramas on Netflix. Check it out now!

Hyun-Bin and Son Ye-jin are currently dating, so its no wonder that these two had such great chemistry in this K-drama!

Moon Gang-tae lives with his older brother Moon Sang-tae. They have been constantly moving from place to place after Sang-tae witnessed the death of their mother. Gang-tae starts working in a psychiatric ward, where he meets the famous children’s book author, Ko Moon-young. She develops a romantic attraction for Gang-tae and goes to extreme lengths to get his attention.

Cha Eun-ho is the youngest ever chief editor at his publishing company. Kang Dan-yi used to be a famous copywriter. She’s divorced and a single mother, who is struggling to find a job. Eventually, she gets a job Eun-ho’s company, after lying about her background. As they become more involved with each other, love begins to bloom.

Cha Dal-gun works as a stuntman, looking after his orphaned nephew. When a plane crash kills his nephew, Dal-gun finds evidence that a plane crash was not due to structural failure, as was claimed. He needs to work with Go Hae-ri to reveal the truth whilst trying to avoid danger.

Emperor Lee Gon of Kingdom of Corea travels to an alternative reality after crossing the mythical border his half-uncle created. He meets detective Jung Tae-eul, who he recognises from ID he found in his world at the time of his father’s assassination. He falls for her at first sight and stays in her world to get to know her to find out the truth of what happened to his father.

At the age of eight, Park Joo-hyung is sent to Italy after being adopted by an Italian family. He joins the mafia where he is adopted by Don Fabio, head of the Cassano family. Park Joo-hyung changes his name to Vincenzo Cassano and becomes an Italian lawyer, a consigliere for the mafia. After Fabio dies, his biological son is out to kill Vincenzo.

Vincenzo received viewing ratings of 14.6%, making it one of the highest-rated K-dramas in Korean cable television history.

Oh Dong-baek is a single mother running a bar called Camellia. Six years later, she meets Yong-sik, who is madly in love with her despite her rejections. Although, the more time she spends with him, the more her feelings begin to grow. But a notorious killer sets out to take Dong-baek as their next victim, Yong-sik needs to use his police officer skills to find the killer before he gets to Dong-baek.

Noh Ae-jung is a single mother with a strong survival instinct who has been single for 14 years. Suddenly, four men appear in her life. They are all very different: one is bad, but attractive; another is pathetic, but rich and handsome; the third is scary, yet sexy; and the last is a flirty younger man.

Lee Jeong-in is a librarian who is in a 4 year relationship with a banker, Kwon Gi-seok. When she visits a pharmacy for a hangover remedy, she meets pharmacist Yoo Ji-ho, who kindly pays for her because she left her wallet somewhere else. As they spend more time with each other, Jeong-in realises that Ji-ho might be the one she loves. And despite everyone else frowning on him, Jeong-in doesn’t even mind that Ji-ho is a single father.

This K-drama is in the format of interviews following the stories of six people and their dating lives. Park Jae-won is not able to forget the woman who stole his heart and disappeared. Lee Eun-o meets Jae-won under a fake name and falls in love with him. Choi Kyeong-jun and Seo Rin-i appear to be in a stable relationship. Kang Geon has not had a relationship for 2 years and his ex-girlfriend, Oh Seon-yeong, is a ‘serial dater’.

Eugene Choi was born into slavery in Joseon, but managed to escape to the United States. He returns back to Joseon on a mission for the United States Marine Corps, but ends up falling in love with an aristocrat’s grand-daughter, Go Ae-shin. However, their love is challenged by their different social classes and Kim Hee-sung, who has been Ae-shin’s betrothed since childhood.

Just released from prison for violent assault after beating up Jang Geun-won, who caused his father’s death, Park Sae-Ro-Yi opens up a restaurant in Itaewon. He hires Jo Yi-seo, who is popular on social media, as a manager and she falls in love with Sae-Ro-Yi. But Sae-Ro-Yi is still focused on getting revenge and destroying the Jagga company, which is Geun-won’s father’s company.

Set during the Joseon Dynasty, Crown Prince Lee Chang and his subordinates are searching for the doctor who last treated his father to find out the truth of what happened to him. However, they instead find an unnatural plague spreading throughout the lands – monsters that want to eat human flesh are appearing. Amidst royal corruption and chaotic villages, Lee Chang now needs to fight for his survival from enemies both human and zombie.

This is one of my favorite K-dramas, so I would definitely recommend it to any horror fans!

Set in the fictional Sandbox, this K-drama tells the story of those in the world of startup companies. Seo Dal-mi is a bright and ambitious woman who dreams of becoming Korea’s Steve Jobs. Nam Do-san was once the pride of his family being a math genuis, but his investments have been going nowhere. He meets Dal-mi, who misremembers him as her first love, and begins a startup, determined to make her misunderstanding a reality.

Eun-seom is half Saram (human) and half Neanthal. He was raised with the Wahan tribe, but he was different from them. He had purple lips, scars on his back and could copy any maneuver by seeing it just once, so he’s teaching Tan-ya the dance of the Great Spiritual Mother. But his extraordinary abilities put him on the verge of banishment from the Wahan tribe and he doesn’t want to leave Tan-ya, who he loves, behind.

This K-drama portrays the story of doctors, nurses and patients at Yulje Medical Centre. The main cast are five doctors who have been friends since they entered medical school in 1999.

Four demon-hunters, called Counters, bear the task of searching for and thus banishing evil spirits that escape from the afterlife to gain immortality. They possess humans that have killed or have a strong desire to kill and consumes their spirit. Three of the hunters pose as workers in Eonni’s Noodles, which serves as their hideout.

After tragedy strikes his family, Cha Hyun-soo decided to leave home and live alone in an apartment building. Then monsters start appearing in the outside world and all the residents are trapped in the building. Hyun-soo and the rest of the residents shield themselves in the hopes of surviving as long as possible.

Due to her face blindness disorder, Han So-yeon made the decision to live a reclusive life. But when she starts using the AI program Holo whose appearance is like that of his creator, Go Nan-do, she begins to change. The real Nan-do begins to fall in love with So-yeon, but his contrasting personality to the Holo is not in his favor.

The story of unrequited love of three high school students. Shin Sol-i is a cheerful girl, who is in love with her classmate and next-door neighbour, Cha Heon. He acts distant around her, but is actually just awkward when it comes to expressing his feelings. Things get more complicated when Woo Dae-seong transfers to their school and falls in love with Sol-i.

This K-drama tells the story of a mysterious outdoor drinking establishment run by the illtempered Weol-ju, an innocent part-timer Han Kang-bae and former afterlife detective Chief Gwi who visits customers in their dreams to help resolve their problems. Kang-bae has an ability that with a touch, he can make people tell their troubles. This is useful to Weol-ju who needs to settle the grudges of 100,000 souls.

This is one K-drama that you need to watch ASAP!

After receiving an email regarding a groundbreaking AR game about medieval battles in the Alhambra, Yoo Jin-woo, CEO of an investment company, travels to Spain to meet the creator, Jung Se-joo. However, Se-joo has gone missing and instead Jin-woo meets Se-joo’s older sister, Hee-joo. She owns the hotel at which Jin-woo is staying. As the border between the AR game and reality begins to blur, mysterious incidents start happening.

Oh Ji-soo is a talented student who runs a prostitution ring providing security to earn some money and support himself living alone. One of his classmates, Min-hee, works for him, but Ji-soo has other problems: Gyu-ri, another girl in his class, has found out about his business and wants to help him run it.

I absolutely loved this K-drama! It’s definitely one of my favorites.

Did we find your next favorite Korean dramas on Netflix? Let us know! 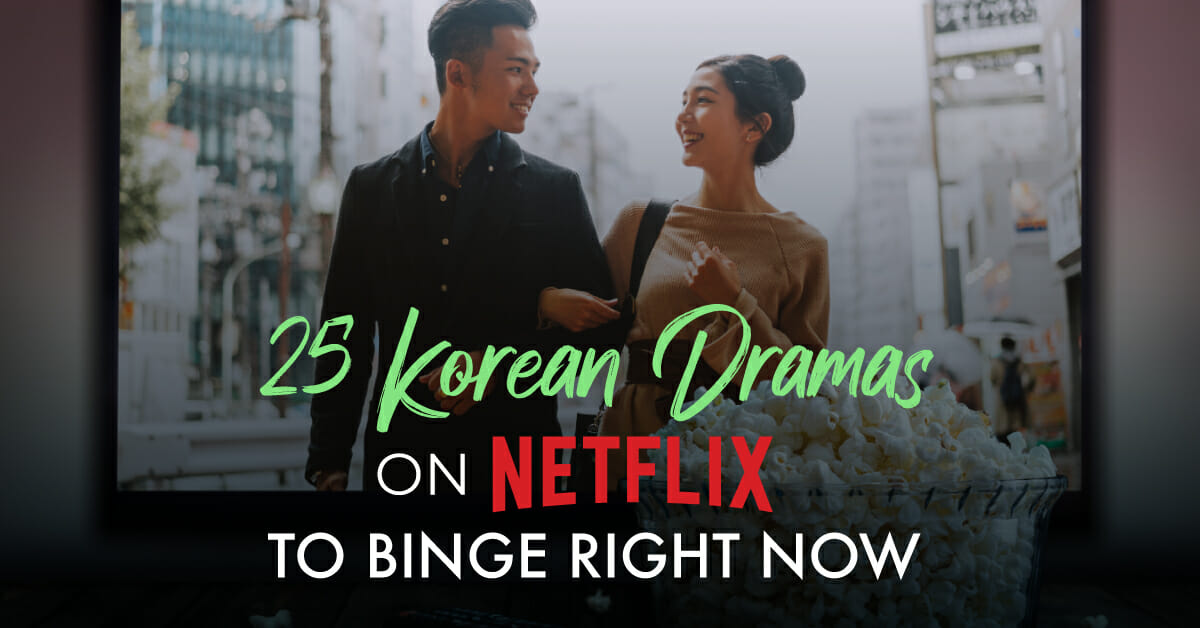