With so many streaming services around, it can be hard to choose just one. But if you’ve got Amazon Prime and you’ve been searching for some romance movies to watch, then we’ve got you covered. After careful consideration, we’ve picked out the best romance movies on Amazon Prime that you need to watch right now. So, check them out!

The Handmaiden is inspired by 2002 novel Fingersmith by Welsh author Sarah Waters. Although, the setting is changed from Victorian era Britain to Korea under Japanese colonial rule. This version tells the story of a Korean con man who, with help from an orphaned pickpocket, devises an elaborate plot to seduce and bilk a Japanese woman out of her inheritance. The movie was released to critical acclaim. It was listed on over 20 critics top then movies. And in 2019, The Guardian ranked The Handmaiden 41st in its 100 best films of the 21st century list.

When her father goes blind, Griet must go to work as a maid for painter Johannes Vermeer. While cleaning the house, Griet strikes up an unlikely friendship with Vermeer. A friendship which both agree to keep secret for fear of provoking the painter’s jealous wife, Catharina. When wealthy patron Van Ruijven begins to lust after Griet, and commissions a painting of her, Vermeer and Griet are obliged to spend long hours alone together.

Overwhelmed by her suffocating schedule, touring European Princess Ann takes off for a night while in Rome. When a sedative she took from her doctor kicks in, however, she falls asleep on a park bench. She is found by an American reporter, Joe Bradley, who takes her back to his apartment for safety. At work the next morning, Joe finds out Ann’s regal identity and bets his editor he can get an exclusive interview with her. But romance soon gets in the way. The movie was so popular that a sequel was said to be in the works but unfortunately it never took off the ground so for now we have to make do with just this one classic!

Kumail is a Pakistani comic, who meets an American graduate student named Emily at one of his stand-up shows. As their relationship blossoms, he soon becomes worried about what his traditional Muslim parents will think of her. When Emily suddenly comes down with an illness that leaves her in a coma, Kumail finds himself developing a bond with her deeply concerned mother and father. Regarded as hilarious yet heartbreaking this isn’t one to miss!

Tom, greeting-card writer and hopeless romantic, is caught completely off-guard when his girlfriend, Summer, suddenly dumps him. He reflects on their 500 days together to try to figure out where their love affair went sour, and in doing so, Tom rediscovers his true passions in life. This movie has been praised for its charm, wit, honesty and stong performances from its two leads this one is definitely worth a watch!

This is a cult classic that pairs Harold a dead-pan disillusioned 20-year-old obsessed with suicide and a lovable Maude a fun-loving 80-year-old eccentric. They meet at a funeral, and develop a taboo romantic relationship, in which they explore the tired theme of the meaning of life with a fresh perspective. This movie incorporates elements of dark humor and existentialist drama. On it’s release the film received mixed reviews but it has gained in popularity over the years and has now obtained status as a cult classic so this is one not to miss!

This version is a 1992 adaptation of Emily Brontë’s 1847 novel Wuthering Heights. The timeless tale of the fierce passionate love between Catherine Earnshaw and wild spirit her father takes in to be raised as her brother, Heathcliff is covered but this version also follows the often ignored story of the second generation story of the children of Cathy, Hindley and Heathcliff. While this version hasn’t been as critically well received as other movie adaptions it is still worth a watch and Ralph Fiennes earned praise for his portrayal of the dark and sensuous Heathcliff.

The movie follows the traditional tale of Cinderella but with a more modern spin. Cinderella is a budding fashion designer who wants to run her own business and become independent from her wicked stepmother and a Fab G ready to make all her wishes come true. Reviews for this version have been mixed but we would recommend this for a fun, romantic watch with musical numbers aplenty!

An aging silent film queen refuses to accept that her stardom has ended. She hires a young screenwriter to help set up her movie comeback. The screenwriter believes he can manipulate her, but he soon finds out he is wrong. The screenwriters ambivalence about their relationship and her unwillingness to let go leads to a situation of violence, madness, and death. Described as one of the best movies about Hollywood, give this one a watch if you have managed to miss it for all this time!

When hard-charging New York newspaper editor Walter Burns discovers that his ex-wife, investigative reporter Hildy Johnson, has gotten engaged to milquetoast insurance agent Bruce Baldwin, he unsuccessfully tries to lure her away from tame domestic life with a story about the impending execution of convicted murderer Earl Williams. But when Hildy discovers Williams may be innocent, her reporter instincts take over. Described as a definitive screwball romantic comedy and with a strong performance from Cary Grant and Rosalind Russell, this is one not to miss!

While Daisy, an anorexic New York teenager, stays with her cousins in England for the summer, she discovers freedom and passion for love. However, following a terrible attack in London, an all-out war breaks out. In the post apocalyptic world the cousins try to reunite. This film has been widely praised, especially Ronan as the lead so this is definitely worth a try!

Alice, an American stripper who has moved to London, meets Dan on the street. While looking at him, a taxi hits her. After taking her to the hospital, Dan begins dating Alice. A year later, Dan — who has written a novel about Alice — is bored. He flirts with photographer Anna . Pretending to be her in a chat room, he leads dermatologist Larry to an accidental meeting with Anna. As the years pass, both relationships disintegrate. This film won and was nominated for many awards, including Oscars and Golden Globes and was big box office hit so if you haven’t seen this one yet then grab it on Prime now!

Heir to a real-estate dynasty, David Marks lives in the shadow of his father, Sanford. He takes a chance at true love when he meets Katie, a woman of modest origins who sees David’s real worth as a person, not just his family’s wealth. David and Katie marry and plan to build a life together, but their once-loving relationship deteriorates after David gives in to his father’s demand that he work in the family business. The cast has been praised for this movie and although the plot can be rather cliched it is still well worth a watch!

This is a 2021 American science fiction romantic comedy-drama film directed by Ian Samuels, from a screenplay by Lev Grossman, based upon his short story of the same name. It tells the story of two teens who develop feelings for on another whilst stuck in an endless time loop. With likeable leads and an original story this is one to catch!

Rachel Samstat, a New York food critic, beds Mark Forman, a Washington, D.C., newspaper columnist. The two fall in love, and Rachel relinquishes her job and relocates to be with a man who views himself as unfit for marriage. They try to build a life together — literally — as they struggle with the construction crews renovating their home. When Rachel gets pregnant, Mark is enthusiastic, but then soon begins doubting whether he could be a family man. A timeless classic starring two of the biggest leads at the time if you haven’t seen this one yet then catch it now!

Kirk, an average guy stuck in a dead-end job, can’t believe his luck when a gorgeous, successful woman named Molly falls in love with him. With no help from his stunned friends, relatives and ex-girlfriend, Kirk must figure out how to make this unlikely relationship work, even though he’s the first to admit that Molly is way beyond him. This is a light-hearted fun film which may not have won any awards but is still worth a watch!

Which of these romance movies on Amazon Prime will you be watching next? Let us know!

If you love romance, then check out: 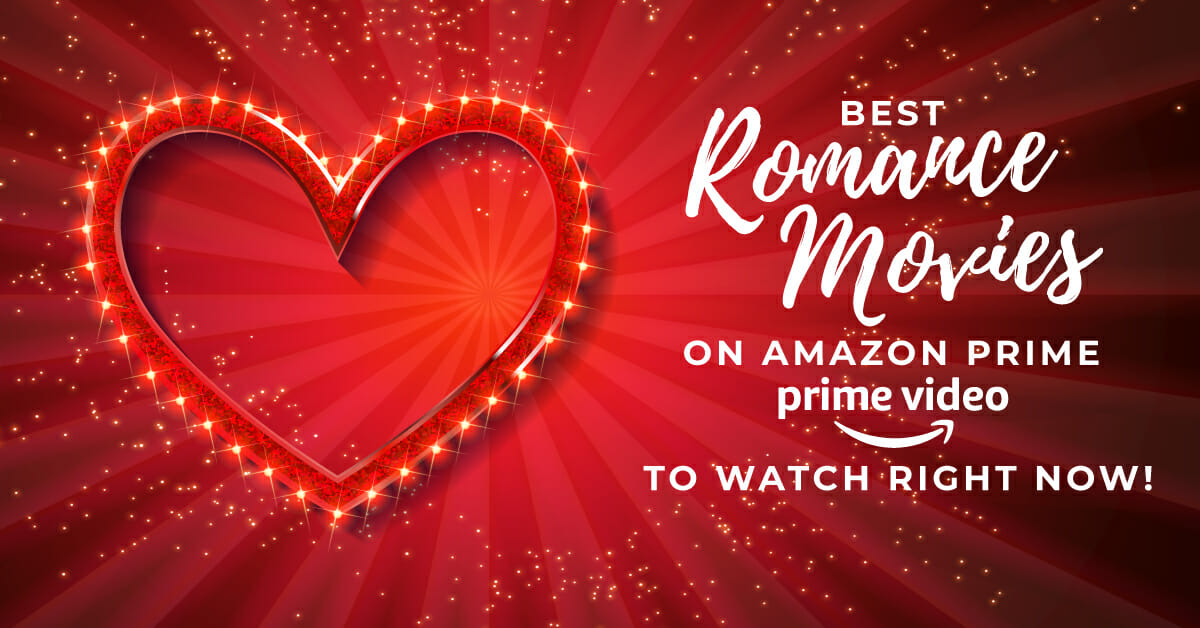