In the prestigious Shuchiin Academy’s student council, Kaguya Shinomiya, the vice president, and Miyuki Shirogane, the president, are in an unspoken war. Although they both have feelings for each other, they are too proud to admit it and confess their love. So, what else is there to do except coming up with schemes to make the other person confess?

Along with the other student council members – Chika Fujiwara, Yu Ishigami and Mika Iino – Kaguya and Shirogane need to balance their feelings and doing work for student council.

Haruhi gains a scholarship at the prestigous Ouran Academy, but when looking for a quiet place to study Haruhi finds herself in the Third Music Room, the location of the Ouran High School Host Club, where six attractive male students entertain the female students with sweets and tea. After accidentally destorying an expensive vase, Haruhi finds herself a member of the club as an errand runner.

Her short hair, masculine attire and gender-ambiguous face cause her to initially be mistaken as a male student. Although the club soon discover her real gender, she becomes a host as she is a natural when it comes to entertaining the girls.

Arima Kousei used to be a skilled pianist, but he hasn’t been able to play since the traumatic death of his mother. Then he meets a beautiful violinist, Kaori Miyazono, in the park and she tries to guide him back into the world of music. She hides a secret of her own, but she helps Kousei to reignite his passion for piano playing.

As she continues to encourage him, Kousei finds himself falling in love with Kaori. But she’s in love with one of his friends, Watari. And, to make things even more complicated, Kousei’s childhood friend, Tsubaki, is in denial about her feelings for Kousei.

At school, Kyoko Hori is bright and cheerful. At home, Hori is a homebody, who dresses down and takes care of her younger brother, which is something that she wants to hide from the rest of her classmates.

One day, her younger brother is helped home after a nosebleed by someone with a punk-style. He introduces himself as Izumi Miyamura – one of Hori’s classmates. But he’s also hiding this side of himself. Hori never would have been able to guess that the gloomy, glasses-wearing boy was someone with tattoos and piercings. So, they agree to keep their identities a secret and begin to spend more time together.

Once an all-boys high school, Saika High, infamous for rowdy students has become a co-ed school. However, the female population is still a minority. Misaki Ayuzawa is working hard to make the place a better school for girls. She puts in a lot of effort and it pays off – she’s the first female school council president.

Misaki works part-time in a maid cafe to support her ill mother and sister by returning the huge dept left by their father. Unfortunately, this is discovered by Takumi Usui, a popular student at Seika High. Instead of revealing her secret, Takumi becomes a regular there and they begin to fall in love with each other.

Tohru Honda is left temporarily homeless and living in a tent after her mother’s death. She is discovered by two members of the Soma family – her classmate, Yuki and his older cousin, Shigure – who invite her to live with them. Yuki’s other cousin, Kyo, moves in as well. After accidentally falling into Kyo, Tohru finds out that the Soma family are hiding a secret: they’re possessed by the spirits of Chinese Zodiac and they turn into their respective animal under certain conditions.

Tohru swears to keep it a secret, but the curse is far deeper and darker than she could ever imagine. She sets out to break the curse to free the Somas from their binding to the physically and emotionally abusive family head, Akito. Along the way, she meets more of the Soma family and falls in love.

Humans and androids with human-like appearances live side by side. SAI Corp, the leading android production company, introduce Giftia – the most human-like androids. But they have a lifespan of roughly nine years and four months. Once the lifespan expires, their personality distorts and makes them violent. This requires the Terminal Service to retrieve Giftias before the end of their life spans.

Tsukasa Mizugaki is the newest member of Terminal Service One. His partner is Isla, a Giftia. Tsukasa and Isla are tasked with collecting the Giftia’s near the end of their lives and separating them from the humans they have developed a connection with. But Tsukasa realises that the more time they spend together, the more he’s falling in love with Isla.

Shirayuki is a normal herbalist in the kingdom of Tanbarun. Her beautiful red hair attracts a lot of attention, meaning that she had to be careful when visiting new places growing up. Prince Raj notices Shirayuki and orders her to become his concubine. Refusing him, she cuts off her hair and leaves it with him because she knew that he only wanted her for her hair.

Escaping to the neighbouring kingdom of Clarines, she meets Prince Zen Wistaria and his two aides, Mitsuhide and Kiki. However, Prince Raj isn’t pleased that Shirayuki rejected him. As she tries to stay out of danger, she begins to develop feelings for Prince Zen.

Rascal Does Not Dream of Bunny Girl Senpai (2018)

Mai Sakurajima is an actress, who decides to take a break from the pressures of her work. Suddenly she realises that people no longer acknowledge her existence at all. She’s practically invisible to everyone. Until she meets Sakuta Azusagawa at the library, whilst wearing a bunny girl outfit to test if people would notice her.

As time passes, more and more people start to forget about Mai’s existence until Sakuta is the only person who remembers her. He loves her, but he’s worried about forgetting her. And he’s the only one who can help Mai be remembered again.

Takeo Gōda is a tall and muscular high school student who doesn’t have much luck with women. They tend to end up falling in love with his best friend, Makoto Sunakawa – who is charming and handsome.

However, everything changes when Takeo saves Rinko Yamato from a groper on the train. Above all other expectations, she falls in love with Takeo beginning their unique love story.

15-year-old high school freshman Sawako Kuronuma – dubbed Sadako by her classmates for her resemblance to the character from The Ring – has always been feared and misunderstood because of her appearance. However, she is actually a sweet and unassuming girl who only longs to be helpful.

When a boy, the popular Kazehaya, begins talking with her, everything changes. She finds herself in a new world, making new friends and talking to different people, and she can’t thank Kazehaya enough for these new opportunities. Slowly, but surely, a sweet love blossoms between the two as they overcome circumstances and obstacles that stand in their way.

Tomoya Okazaki is a third-year high-school student who hates his life. An injury meant that he could no longer play on the basketball team and he distances himself from others. Thus, his delinquent life begins.

When Tomoya meets Nagisa Furukawa, a soft-spoken girl who is one year older than him, but had to repeat a year due to illness, everything changes. Her goal is to join the drama club which she was unable to do because of her sickness, but they find that it has disbanded. So, Tomoya helps Nagisa to reform the drama club. A task which brings them closer together.

Did we find your next favorite romantic anime on Hulu? Let us know! 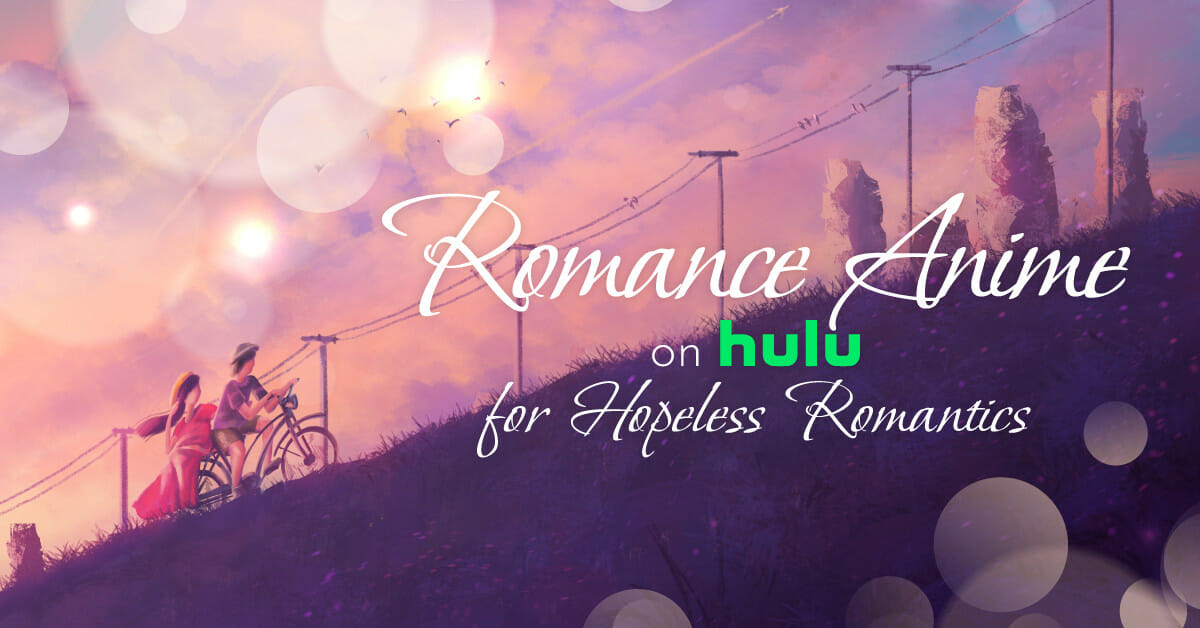