All About Magic Hour By Kristin Hannah

Magic Hour is a story about the resilience of the human spirit, the triumph of hope, and the meaning of home. Magic Hour by Kristin Hannah – #1 New York Times bestselling author of The Nightingale and The Great Alone – was initially released in 2006. But it was released in 2020. Since it’s first release, it has been heavily praised by the critics, which makes it an absolute must-read book. So, check it out now!

In the rugged Pacific Northwest lies the Olympic National Forest. With nearly a million acres of impenetrable darkness and impossible beauty. From deep within this old growth forest, a six-year-old girl appears. However, she is speechless and alone, offering no clue as to her identity, no hint of her past. Despite this, child psychiatrist Dr. Julia Cates is determined to free the extraordinary little girl she calls Alice from a prison of unimaginable fear and isolation. Julia must discover the truth about Alice’s past in order to help her.

Although a judge rules in her favor, child psychiatrist Dr. Julia Cates is found guilty of incompetence in the press. Her entire life has centered on her exclusive practice, and now all her patients have abandoned her. Salvation comes unexpectedly at the behest of her estranged sister, Ellie, the chief of police in their hometown of Rain Valley, Washington. Julia never wanted to go back to their small logging town, where she was the scrawny bookworm and Ellie was the homecoming queen, but now, even though they refuse to admit it, the sisters need each other as they try to save a young girl found in a forest in the company of a wolf. She behaves like an animal and doesn’t speak. Julia works hard to break the mute silence of the mysterious little girl; Ellie tries to find out where she belongs; and both of them defend the girl they decide to call Alice against those who would exploit her. Through helping this young lost soul, Julia and Ellie learn a lot about themselves and about their relationships in one of this perennially best-selling writer’s most compelling and riveting novels to date. Magic Hour will enhance Hannah’s popularity and affirm her dominance in women’s fiction.

Hannah’s melodramatic 15th novel (after The Things We Do for Love) tells the addictive soap opera story of a feral child and the adults who rally to help her. The cast of stock characters is led by child psychiatrist Dr. Julia Cates, whose reputation was ruined when she failed to prevent a teen patient from staging a Columbine-style massacre. Her sister, Ellie Barton, a smalltown former homecoming queen–turned–chief of police, summons Julia from Los Angeles to their Pacific Northwest hometown of Rain Valley to take on the case of a mysterious lost child, who appeared one day on the edge of town, presumably raised by wolves. With the dashing doctor Dr. Max Cerrasin at her side, Julia works diligently to tame the mute girl, whom she names Alice. Max, like Julia, is running from demons of his own. Though she initially rebuffs his overtures (“When I love, I risk my heart. All or nothing,” Julia declares), their romance inevitably blossoms while they work to solve the mystery of Alice’s parentage. The novel’s real love story, though, is the passion between Alice and Julia, and it’s hard not to root for the vulnerable little Wolf Girl. (Mar.)

Will you be reading Magic Hour by Kristin Hannah? Tell us! 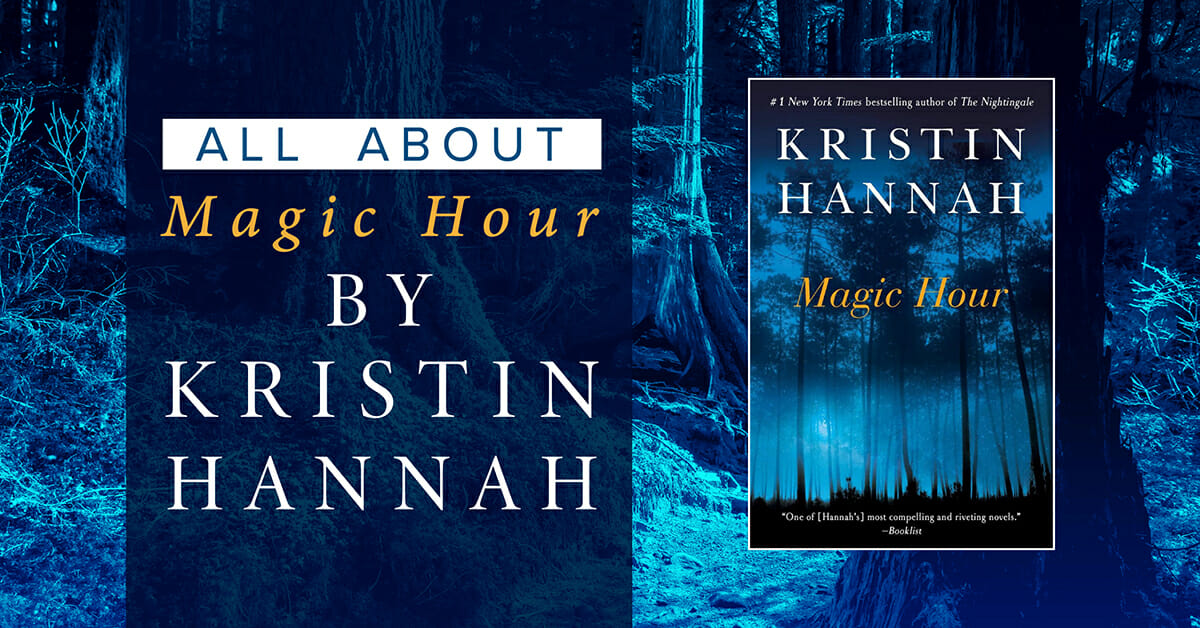