Chesapeake Shores Season 6 returns to Hallmark this summer! On June 29 Hallmark Channel confirmed that the Season 6 premiere date is Sunday 14 August! It’s the sixth and final season and we were left with many burning questions at the end of season 5. So, we really can’t wait for this to drop so that we can catch up on the O’Brien family.

Chesapeake Shores is a multi-generational family drama TV series. It is based on the book series of the same name from author Sherryl Woods. The show premiered on the Hallmark Channel in August 2016 and has had a new season released every subsequent August. The exception to this though is Season 5, which was help up from 2020 to 2021 due to delays caused by the covid pandemic. The main cast consists of Jesse Metcalfe, Meghan Ory, Barbara Niven, Laci J. Mailey, Emilie Ullerup, Brendan Penny, Andrew Francis, Diane Ladd and Treat Williams.

The series follows Abby O’Brien Winters as she returns to her hometown of Chesapeake Shores, Maryland from where she was living in New York. The reason for her return to her hometown is a desperate phone call from Jess, her younger sister who has been renovating the Inn at Eagle point and has been threatened with its foreclosure.

Abby has been juggling a demanding career, recent divorce and raising her young daughters and this hasn’t left her much time to think about the town her father built. Returning to Chesapeake Shores to help her sister means that she has to deal with her fractured family once again. Her return also brings her back to Trace Riley, who was her first love until she abruptly left him sixteen years previously. At Chesapeake Shores Abby will find a troubled family dynamic and second chances at love!

The official season 6 trailer isn’t available yet but bookmark this page and check back, we will update this the second it lands!

As with every season, there are expected to be 10 episodes in season 6. Whilst we don’t have the official episode titles yet we will update this as soon as we find more information so watch this space!

Meghan Ory – Abby O’Brien-Winters. Abby is the oldest child of Mick and Megan. She is a high-powered New York City career woman, recently divorced and the mother to two young children. When she is called back to Chesapeake Shores to help out her younger sister she decides to stay.
Barbara Niven – Megan O’Brien. Megan is Mick’s estranged wife and mother to Abby, Jess, Bree, Brendan and Andrew. The children hold a grudge against her after she left them when they were young but Megan says that she had no choice as she couldn’t stay with Mick but didn’t want to uproot the children.
Laci J. Mailey – Jess O’Brien-Peck. Jess is Abby’s youngest sister who is trying to renovate The Eagle Point Inn but when she gets into financial difficulties she calls her sister for help save her from bankruptcy.
Emilie Ullerup – Bree Elizabeth O’Brien. Bree is Abby’s youngest sister who was working as a playwright in Chicago. After her first play received glowing reviews she struggles to match its success. She returns home when she learns of her grandmother’s illness and hopes to overcome her writers block.
Brendan Penny – Kevin O’Brien. Kevin is the oldest son of Mick and Megan. He was previously a medic in the US Army but he returns to Chesapeake in search of a new career.
Andrew Francis – Connor O’Brien. Connor is the youngest son of Mick and Megan. He studies for a law degree and becomes an aspiring attorney.
Diane Ladd – Nell O’Brien. Mick’s mother and matriarch of the O’Briens. When Megan left and Mick was busy with work Nell became the primary caregiver and helped raise the children.
Treat Williams – Mick O’Brien. Mick is the patriarch of the O’Briens and father to Abby, Jess, Bree, Brendan and Andrew. He runs his own construction company and had to raise the children alone when his wife, Megan, left (with help from his mother)
Robert Buckley – Evan Kincaid. Evan is a successful entrepreneur who brings a development project to town.

What Happened In Season 5

Whilst we get ready to watch season 6 of Chesapeake Shores, let’s recap what happened in season 5 – spoilers ahead!

After Abby and Trace’s big reunion kiss at the end of season 4 we began season 5 with high hopes for the couple. But in the conversation that follows the kiss immediately leads to their breakup. After their breakup Trace decides to sell his share of The Bridge back to Mick and leave town again. Jay ends up comforting Abby when they do a beach clean up but Abby tells him that she isn’t ready for another relationship.

Bree returns from England where her play had a successful run, she has an interview for a university job with whom she thinks is her high school nemesis but she begins to realize that maybe she misread the signals. Just after being asked for her number by Luke Bree goes on a working date with Jerry, where she asks him to be her plus one to Jess and David’s wedding.

The children are eager to know what developments there are in Mick and Megan’s rekindling relationship. Mick continues to deal with the legal fallout from the lawsuit against one of his subcontractors that was revealed at the end of season four. The lawsuit begins to affect Abby and Mick’s business as customers leave following being dragged into it.

Kevin and Sarah continue with discussions about having a baby until Sarah finds out that she has a medical condition that would make it difficult for her to get pregnant.

Megan learns that the $8 painting that she bought from a shop is the work of a local reclusive artist and she makes it her mission to track them down. At first she is successful but eventually with help from Nell she meets Driscoll and begins to break down some of his barriers. When he discovers that Caitlyn has a talent for drawing he decides to mentor her. Driscoll then ends up going on a date with Nell.

Luke is offered a job at The Bridge by Mick, which he initially turns down but when he gets desperate he decides to take. He then confesses to Mick that he has been to prison.

Jess and David are having difficulties with his parents over what type of wedding they will have, including whether they should have a prenuptial agreement. Later in the series Jess and David’s wedding plans are in full swing but Jess is having doubts about if she wants to have children as she grew up without a mother and is worried that this will make her a bad mother.

Connor begins his new job and he is assigned a paralegal, Margaret. Connor continues to impress his boss at his new job but then he notices that she takes on Dilfer, Mick’s concrete supplier, as a client. Despite asking his boss not to get involved with the case she refuses and Connor finds out that Dilfer forged his father’s signature on a number of contracts. Mick is about to be deposed by Connor’s superiors when Connor shows up with evidence of the forgeries and then he resigns from his job. After quitting his job Connor begins to make plans to start his own practice.

Meanwhile, when Abbey discovers some artifacts in the grounds of the hotel when they are being excavated she ends up being visited by the Smithsonian museum and work on the hotel has to be put on hold for six months.

Jess and David’s wedding goes off without a hitch. At the wedding Bree dances with Jerry but when he leaves she dances with Luke, which is witnessed by Jerry on his return. Abbey dances with both Jay and Evan, where Evan reveals that he is pulling out of the hotel plans because of the delay.

Sarah has a dizzy spell which lands her in the hospital, where she finds out she is pregnant. Kevin and Sarah decide to keep her pregnancy a secret for the time being.

After throwing his back out at the O’Brien house Evan ends up staying there for a few days. After this he decides not to pull out of the hotel but to continue with the building schedule and to include a museum as part of the plans. He also tells Abby that it’s obvious that Jay is in love with her but then Evan later asks Mick’s permission to take Abby on a date.

Bree decides that she wants to date Luke but Luke worries that he hasn’t had the courage to tell her about his stint in prison. Just as he is about to tell her Jerry gets there first and tells Bree that Luke has been in prison.

When Mick is asked to spread one of his old friend’s ashes from his plane he goes missing. The family have a night of worry before it was found that he had to crash land his plane and was rescued by the coast guard. He is injured and has to spend some time at the hospital but his injuries aren’t life threatening.

Luke’s parole officer tells Luke that he has tested positive for amphetamines and he needs to attend a hearing, but Luke is adamant that he didn’t take anything. Connor agrees to take on the case but then Connor collapses with a near heart attack.

That wasn’t the end of the medical scares for the end of season as Sarah also collapses and it is revealed that she suffered a miscarriage. This sends her into a deep depression.

Mick reveals that he wants to take a year off work and travel with Megan but then she reveals that she has received an offer of a dream holiday in Los Angeles which threatens their trip and also their relationship.

In the final episode Abby finds that she has to choose between Evan and Jay when Jay asks her on a date just before Evan confesses his feelings to her. Bree hears Abby leaving a message saying “Let”s give it a try” to either Jay or Evan but just before Abby can reveal who it was Connor collapses again, with another heart scare.

Chesapeake Shores Season 6 – What We Can Expect

Hallmark have announced that Chesapeake Shores will be returning for a Season 6. That’s the good news – the bad news is that Season 6 will also be the final season! So prepare to say goodbye to the families and friends of Chesapeake Shores with a final send off that is due to air in the summer of 2022. A release date hasn’t been confirmed as yet but we will keep you updated when we find out more! But as every previous season has aired in August of each year since it’s premiere in 2016 (with the exception of 2020 due to delays caused by the Covid Pandemic) then it would be safe to assume that Season 6 will air in August 2022.

As season 5 ended on some cliffhangers we are hoping for some answers to some burning questions!

Will Connor survive another health scare? What lies ahead for Megan and Mick – will she choose family or her career this time? And of course, who was it that Abby asked to “give it a try” – Jay or Evan (we know which team we are!).

Will there be a 6th season of Chesapeake Shores?

How can I watch Chesapeake Shores season 6?

Where is Chesapeake Shores filmed?

Although Chesapeake Shores is set in Maryland, which is on the east coast it is filmed on Vancouver Island.

Is Chesapeake Shores returning in 2022?

Yes Hallmark did cancel Chesapeake Shores . But the series will be given a conclusion as the sixth and last season will air in the summer of 2022.

What should I watch after Chesapeake Shores? 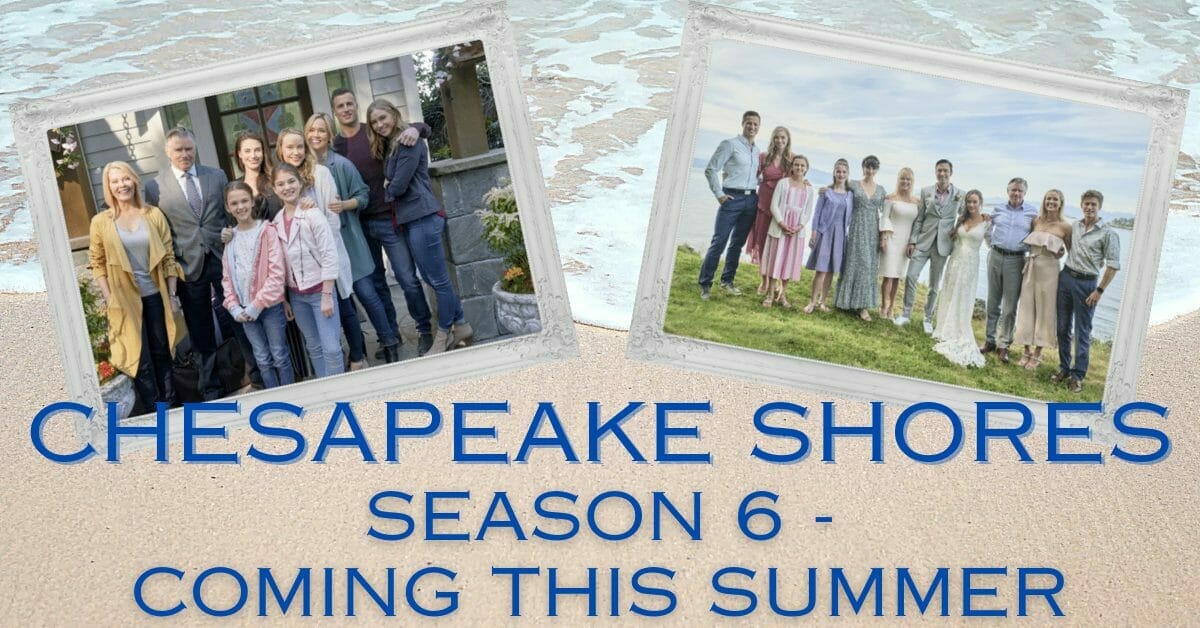