Everything You Need To Know About The Chesapeake Shores Series

Where do we even begin with Chesapeake Shores? We absolutely love it! You just can’t help falling in love with the O’Brien family. It’s so inspiring to see every family member get the happily ever after that they deserve and the family just keeps on growing, which we just adore. There’s so much you need to know about the Chesapeake Shores series – about the books, the TV show – but we’ve got it all right here. Check it out now!

Abby O’Brien Winters (Meghan Ory) returns to her hometown of Chesapeake Shores, Maryland after receiving a panicked phone call from her sister Jess (Laci J. Mailey), who is renovating the Inn at Eagle Point. Helping her sister save the inn from closure means that she needs to come face-to-face with the past and her first love, Trace Riley (Jesse Metcalfe), who she left behind sixteen years ago.

The first season premired on the 14th of August 2016 on the Hallmark Channel. There are currently four seasons released, with a fifth set for release on the 15th of August 2021 (which we seriously cannot wait for!). Metcalfe stated that he would be leaving the series and that his character’s storyline would be concluded early on in season five. Actor Robert Buckley will be joining the main cast this season.

If you are new to Chesapeake Shores you can watch the trailer below!

And while you are waiting for the new season you can catch a sneak peak of season 5 here:

Before it was the much-beloved TV series, Chesapeake Shores started out as books. Sherryl Woods started the series with The Inn At Eagle Point in 2009, with the second and third books being released in the same year. The most recent release was Lilac Lane in 2017. Each novel follows different characters, all revolving around the O’Brien family.

The Inn At Eagle Point

It’s been years since Abby O’Brien Winters set foot in Chesapeake Shores. The Maryland town her father built has too many sad memories and Abby has too few spare moments – thanks to her demanding Wall Street career, her crumbling marriage and energetic daughters.

Then a panicked phone call from her youngest sister brings her racing back home to protect Jess’ dream of renovating the charming Inn at Eagle Point. But returning means reuniting with the man she left ten years ago.

When her last two plays are dismal failures and her relationship with her temperamental mentor falls apart, writer Bree O’Brien abandons Chicago and the regional theater to return home.

Opening Flowers on Main promises to bring her new challenge and a new kind of fulfilment. But not all is peaceful and serene in Chesapeake Shores, with her estranged mother on the scene and her ex-lover who is still in love with her.

Struggling in his role as a newly single father, former army medic Kevin O’Brien moves home to Chesapeake Shores. He wants a haven for himself and his toddler son, surrounded by the family he knows he can count on.

But Kevin is suddenly facing a risk he hadn’t anticipated, in the form of Main Street bookseller Shanna Carlyle. She immediately recognizes him as a wounded soul. A type she’s had way too much experience with. Still, he’s almost impossible to resist.

After years apart, Mick and Megan O’Brien are finally ready to make it official again. Most of their grown children couldn’t be happier about their rekindled love and impending marriage.

Except for Connor. Driven to become a divorce attorney after what he views as his mother’s abandonment of their family, Connor’s not about to give his blessing on this romance.

Single mom Heather Donovan’s dreams of home and family are within reach when she settles in Chesapeake Shores. The welcoming arms of the loving O’Brien clan embrace her and her son. But their support seems to further alienate her son’s father, Conner O’Brien.

Then everything changes. Heather’s just about given up on her old dreams – love, family and Driftwood Cottage, the home she wishes were hers. It’s going to take some persuasion and help form the O’Brien family to make Heather believe that some dreams are worth fighting for.

Jess O’Brien has overcome a lot – the challenges of attention deficit disorder, the near bankruptcy of her beloved Inn at Eagle Point and her self-perception as a screw-up in a family of overachievers. Now she’s ready to share the future with a man.

She’s joined a dating service, but there’s no takers. Which is fine with her childhood friend, psychologist Will Lincoln, who’s already decided the perfect man for Jess is himself.

Susie O’Brien and Mack Franklin’s ‘not dating’ claim befuddles everyone, especially since they spend every spare minute together. Susie is thrilled when their friendship fianlly heats up. Then, just when things seem to be going well, everything comes crashing down.

Mack loses the job he loves and Susie faces a devastating diagnosis. But O’Briens always unite during a crisis. Even her cousin Jess, Susie’s rival for most of their lives, becomes her greatest supporter – especially when Mack’s former love comes to town.

Dating Matthew O’Brien – a playboy and a younger man – cost Laila Riley her career and her parents’ respect. A high price, even for love. And then Laila decides to break it off.

But the O’Brien family has other ideas. They conspire to get Laila to join them on a Dublin holiday. It’s a great time to get away from it all, but Laila knows that Matthew will be there.

Falling for Moira O’Malley was the unexpected highlight of Luke O’Brien’s Dublin holiday. So when she pays a surprise visit to Chesapeake Shores, Luke is thrilled at first. A fling is one thing, but Luke doesn’t know if he is ready to spend forever with her.

Moira has some soul-searching of her own to do, given Luke’s reaction. Scarred by her father’s abandonment, she wonders if Luke is truly the family man she longs for. And then she’s offered an amazing chance at a dream career of her own.

Jenny Collins wanted nothing more than to be part of a large family like the O’Briens. But when her mother married into that family, Jenny ended up feeling more like an outsider than ever.

Now after years in Nashville as an established songwriter, Jenny is drawn back to Chesapeake Shores to collaborate on a Christmas production and to make peace with the past. As if that’s not challenging enough, Caleb Green, the singer who broke her heart, has followed her to town.

For driven medical student Caitlyn Winters, catching the bridal bouquet at a Christmas wedding has set off a chain reaction that is more of a curse than a blessing. Not only has she fallen in love with family medicine resident Noah McIlroy, but an unexpected pregnancy threatens her well-laid plans for the future.

It doesn’t help that Noah – and all of Caitlyn’s O’Brien relatives – are on board with the prospect of marriage and happily-ever-after. It will take a lot of patience, love and family persuasion to help Caitlyn realize that she can still have everything she ever wanted including a house in Chesapeake Shores.

When former pro football quarterback Aidan Mitchell comes to Chesapeake Shores to take a high school coaching job, he’s embraced by the town. Including the O’Brien family. But Aidan has a secret that could alter their lives.

For wounded Liz March, who’s trying for a fresh start after a devastating betrayal, taking a chance on Aidan may be more than she can handle. But her heart refuses to listen to her head.

Carrie Winters has grown up under the eyes of her watchful grandfather Mick O’Brien and the entire town of Chesapeake Shores. Now that she’s home from Europe, a glamorous fashion career behind and her heart broken, she wants to live up to her family’s expectations.

As if that wasn’t enough, she finds herself drawn to the sexy, grief-stricken Sam Winslow, who is yearning for someone to help raise his nephew.

Single mom Kiera Malone struggled for years to raise her three children in a small town on the coast of Ireland. Just when she’s let down her guard and allowed herself to fall in love again, her fiancé suffers a fatal heart attack and leaves her all alone.

Overwhelmed by her loss, her father persuades her to visit her daughter Moira in Chesapeake Shores. As it turns out, crossing the ocean is nothing compared to moving into a charming cottage on Lilac Lane, right next door to Bryan Laramie.

What do you think about Chesapeake Shores? Let us know! 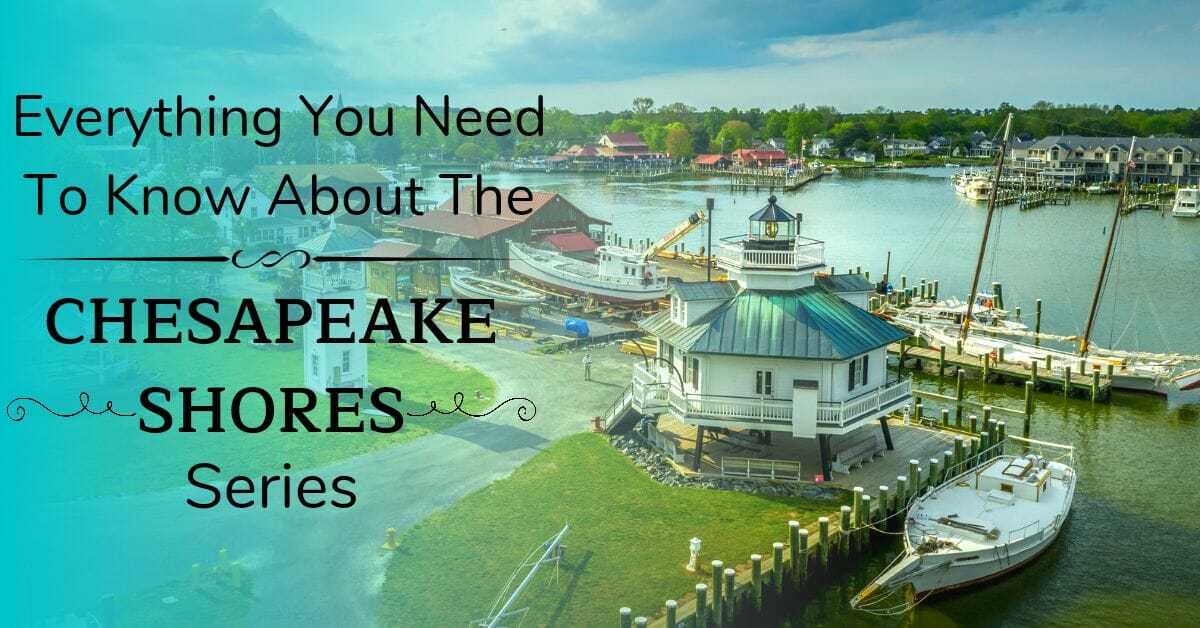