All About The In Death Series

The In Death series is written by author JD Robb (a pseudonym for New York Times Bestselling author Nora Roberts). The series started in 1995 with Naked In Death with book one that introduced us to Eve Dallas and Roarke. The books are romantic suspense novels but with heavy aspects of a mystery crime thriller.

The books are futuristic and are set in the mid-21st century New York City. Eve Dallas is a NYPSD detective who along with her colleague Detective Delia Peabody (and under the mentor of Captain Ryan Feeney) who work in the police and security department and solve crimes in the city. Early on in the series Eve meets Roarke, a handsome and charming billionaire with a possibly shady past. Despite Eve’s misgivings and with her trying hard to resist Roarke is relentless in his pursuit of the detective and they end up in a relationship. There is a new crime to be solved in each book but the overarching story is the relationship between Eve and Roarke.

Lt. Eve Dallas hasn’t even arrived at work when her first call of the day comes in. Alva Quirk – forty-six years old, sidewalk sleeper – was beaten to death with a crowbar. Known to the local cops for handing out origami flowers to anyone who gives her change, Alva was well-liked but with no fixed address, no job and no family, there’s no one to remember her.

Click Here To View On Amazon
Forgotten In Death

In the latest novel in the #1 New York Times bestselling series, homicide detective Eve Dallas sifts through the wreckage of the past to find a killer.

The body was left in a dumpster like so much trash, the victim a woman of no fixed address, known for offering paper flowers in return for spare change—and for keeping the cops informed of any infractions she witnessed on the street. But the notebook where she scribbled her intel on litterers and other such offenders is nowhere to be found.

Then Eve is summoned away to a nearby building site to view more remains—in this case decades old, adorned with gold jewelry and fine clothing—unearthed by recent construction work. She isn’t happy when she realizes that the scene of the crime belongs to her husband, Roarke—not that it should surprise her, since the Irish billionaire owns a good chunk of New York. Now Eve must enter a complex world of real estate development, family history, shady deals, and shocking secrets to find justice for two women whose lives were thrown away…

It’s only on page one and we are thrust straight into the story, the 53rd in JD Robb’s In Death series.  A body is found on a building site, left there like trash, with only some tarpaulin hurriedly covering the body.  The body belongs to a homeless woman, Alva Quirk, who was known in the community for offering paper flowers in exchange for spare change.  She was also known to report to the police any infractions that she witnessed.  When her body is found her notebook where she scribbled notes on any misdemeanors is missing.  She has been beaten to death with a crowbar.

Lt Eve Dallas and Detective Delia Peabody are on the scene but barely have time to process anything before they are called away to another building nearby on the construction site.  The demolition of a wall has revealed another dead body but this one has been there for over forty years.  It is the skeleton of a woman who was pregnant with a near term fetus.  And unlike the body of the homeless women this corpse is adorned in fine gold jewelry and expensive clothing.  There is also signs of violence and gun shot wounds on the body.

Eve is unsurprised yet exacerbated when she learns that the property on which the construction site is situated is part owned by her husband, Roarke.  The other half of the land is owned by Singer Corporation which has links to a Russian mobster owned company, Bardov Constructions.

Eve is determined to find answers for the two murdered women and with her team the analysis of DNA, forensic analysis and anthropological reconstruction begins.  Also all the while Eve is determined to prove that there is a link between the owner of the land and the discovery of these two bodies.  And when Eve begins to join all the links together it leads to a truly explosive finale!

This is another fast paced entry into the In Death Series.  Eve is as determined and dogged as ever to find answers.  And yet again Delia Peabody proves herself to be more than a sidekick but a solid partner with brains and ideas and suggestions of her own.  This book is heavy on the police procedural details but at the same time we get to catch up on our favorite characters from the series in some lighter moments.  As always the interactions between Eve and Roarke are a delight.  And we also get to find out more about the personal lives of some other characters, such as Peabody, McNab, Baxter, Feeney, Mavis and Leonardo.

A huge part of the charm of this series and something that probably explains its longevity is the character development.  Eve is determined, tough and smart but she still comes across as relatable and human, not some perfect robot. And of course she is supported as ever by her ever present husband Roarke.  And the rest of her smart, determined team are on form as always.

This book is well plotted, and does a great job of weaving the two crimes and victims together throughout.   There are plenty of plot twists that will keep us all guessing right up to the explosive finale!

What comes after Forgotten In Death?

How many J.D. Robb In Death series books are there?

Is J.D. Robb ending the In Death series?

Are there any movies based on J.D. Robb In Death series?

No, there are not currently any movies based on J.D. Robb In Death series.

What is the latest J.D. Robb In Death series?

Do you have to read J.D. Robb In Death series in order?

J.D. Robb’s In Death series doesn’t necessarily have to be read in order as the crime in each book is solved within that book. But in terms of the relationships and character development it would make more sense to read the books in order.

What did you think of this JD Robb book? Let us know! 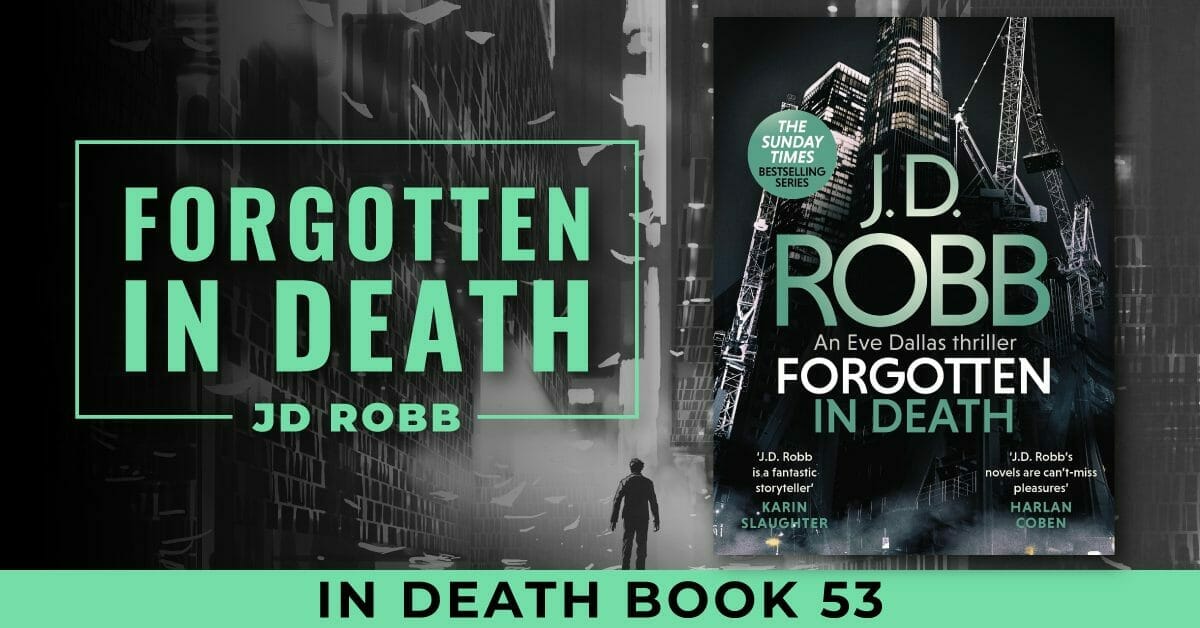