One major thing about Christmas is how it brings the whole family together. And what makes for better fun than animated Christmas movies! Perfect for the whole family – young and old – to enjoy this festive season. So, check out the best 25 titles now.

An optimistic young robin raised by a family of mice makes a heartfelt wish on a Christmas star. Will she finally learn who she is — and how to fly? This is a short but sweet brand new release starring the voice talents of Bronte Carmichael, Richard E. Grant and Gillian Anderson

Shaun the Sheep: The Flight Before Christmas (2021)

When Shaun’s hunt for a bigger stocking hits a snag, the whole farm sets out on a wild holiday adventure. Everyone’s favorite sheep and his farmland gang are back for a brand new Christmas adventure. Another short animation but definitely not to be missed!

A selfish postman and a reclusive toymaker form an unlikely friendship, delivering joy to a cold, dark town that desperately needs it. Starring the voice talents of Jason Schwartzman, J.K. Simmons and Rashida Jones this will keep the whole family entertained! Welcome to the jingle!

The Grinch tells the story of a cynical grump who goes on a mission to steal Christmas, only to have his heart changed by a young girl’s generous holiday spirit. This is the animated version of the classic Dr Seuss tale of The Grinch with the heart that was two sizes too small. Maybe the magic of Christmas can make his heart grow (three sizes). Starring Benedict Cumberbatch as the titular character this version of the classic is well worth a watch!

When the kingdom of Arendelle empties out for the holiday season, Anna and Elsa realize that they have no family traditions of their own. So Olaf sets out on a merry mission to bring home the very best traditions and save Christmas. Everyone’s favorite snowman is back for this Frozen spin-off adventure, this is one for Anna and Elsa fans or for peeps new to the franchise!

Where To Watch: Disney Plus

When Queen Poppy realizes that Bridget and the Bergens don’t have any holidays, she hatches a plan for Branch and the Snack Pack to help create one.
Starring the big name voice talents of Anna Kendrick, Justin Timberlake and Zooey Deschanel. Whether you were a fan of the big haired 80s dolls or otherwise this is a fun film suitable for everyone.

A boy whose dog has just died moves to a new house. In the garden he builds a snowman and then, to keep it company, a snow dog. During the night they both come to life, and the three embark on magical adventures. Based on Raymond Briggs’ book, The Snowman is a family classic for generations to enjoy. So if you happen to have never caught this Christmas movie yet then now is the time!

Everyone knows that, each Christmas, Santa Claus delivers presents to every last child on Earth. What everyone doesn’t know is that Santa accomplishes the feat with a very high-tech operation beneath the North Pole. But when the unthinkable happens, and Santa misses one child out of hundreds of millions, someone has to save the day. It’s up to Arthur, Santa’s youngest son, to deliver a present to the forgotten tyke before Christmas morning dawns. Featuring the voice talents of James McAvoy, Hugh Laurie and Bill Nighy this is a fun film for young and old alike!

When three ghosts take penny-pinching Scrooge on an eye-opening journey, he discovers the true meaning of Christmas — but he must act on it before it’s too late. This is Disney’s animated take on the Dickens classic of the tale of mean-spirited Ebeneezer Scrooge (voiced but the super talented Jim Carrey here). This version of A Christmas Carol is a must see Christmas movie!

Where To Watch: Netflix
Disney Plus

George and The Man in The Yellow Hat are having a merry time counting down to Christmas. But neither can decide what to give each other. Will they find the answers before Christmas morning? This Christmas romp with the very curious monkey George is sure to be a hit with the younger ones!

Where To Watch: Hulu

Polar Express is an inspiring adventure based on the beloved children’s book by Chris Van Allsburg. When a doubting young boy takes an extraordinary train ride to the North Pole, he embarks on a journey of self-discovery that shows him that the wonder of life never fades for those who believe. Starring the voice talent of Tom Hanks this is a fantastic journey that will sure to be loved by all ages!

Beauty and the Beast: The Enchanted Christmas (1997)

In this Disney animated sequel, the lovely Belle and her monstrous beau, Beast, are in the midst of the holiday season. While Belle has no problem getting into the Christmas spirit, Beast isn’t so easily swayed into a celebratory mood. Meanwhile, the castle’s pipe organ, Forte, becomes opposed to Belle’s presence, as well as to her holiday decorating, and schemes to put an end to both her relationship with Beast and any Christmas festivities to boot. Now that’s just mean! Hopefully it will all work out for the magical couple we first met in the big hit Beauty and the Beast!

The Nightmare Before Christmas (1993)

The film follows the misadventures of Jack Skellington, Halloweentown’s beloved pumpkin king, who has become bored with the same annual routine of frightening people in the “real world.” When Jack accidentally stumbles on Christmastown, all bright colors and warm spirits, he gets a new lease on life — he plots to bring Christmas under his control by kidnapping Santa Claus and taking over the role. But Jack soon discovers even the best-laid plans of mice and skeleton men can go seriously awry. It is worth exercising a little caution with very young ones with this movie as there are one or two ‘scary’ scenes. But this movie would definitely be at the top of our must watch Christmas movies list! And it’s certainly a film for big kids and adults alike!

Another Disney twist on the Dickens classic this time with Disneys most iconic characters in the starring roles as Mickey and friends try to get Scrooge McDuck to embrace the spirit of the season. If you haven’t seen this heart-warming classic starring Mickey Mouse then don’t miss out!

The story tells of a young boy, outside Nazareth, who must part with his best friend, an old donkey named Small One. He brings it to market, but no one is in need of a “scrawny donkey”, except for a tanner. This is a heart-warming tale of a boy who discovers the true meaning of Christmas. This is an updated version of a Disney classic so don’t miss it!

Based on the award-winning book by Ezra Jack Keats. Peter goes on a magical, snowy walk to his Nana’s house to bring home their Christmas Eve dinner. This is a sweet film about the true joys of the holiday season and spending time with family and friends.

An epic adventure of a group of heroes with extraordinary abilities. When an evil spirit, Pitch, tries to take over the world, the immortal Guardians must join forces to protect the hopes, beliefs and the imagination of children all over. Featuring the heroes Jack Frost, the Tooth Fairy, the Easter Bunny, the Sandman and of course the season’s main man Santa Claus. Featuring the voice talents of Chris Pine, Alec Baldwin, Jude Law, Isla Fisher, and Hugh Jackman. Don’t miss out on this one!

A small but brave donkey named Bo yearns for a life beyond his daily grind at the village mill. One day, he finds the courage to break free, embarking on the adventure of his dreams. On his journey, he teams up with Ruth, a lovable sheep who has lost her flock, and Dave, a dove who has lofty aspirations. Along with three camels and some eccentric stable animals, Bo and his new friends follow the Star and become accidental heroes in the greatest story ever told — the first Christmas. This is a fun and lovable tale which leads up the first nativity!

Oh takes it upon himself to introduce Christmas joy to his fellow Boovs. Unfortunately, his well-meaning mission nearly destroys the city. Wow, don’t you hate it when that happens. Hopefully Oh can fix everything up in time for Christmas! Starring Kelly Clarkson!

A trip to church with her family on Christmas Eve gives young Angela an extraordinary idea but it isn’t one that everyone approves of. A heartwarming tale based on a story by Frank McCourt.

Wayne is an elf who believes that Christmas is just a job. After working for 227 years preparing homes for Santa’s arrival, he wonders if all his efforts make any difference. His patience is put to the test when he is paired with Lanny, an idealistic rookie who embraces the holiday spirit. The elves encounter unexpected challenges on their mission, and Wayne learns that his job does indeed have impact in a very surprising way. This is a fun and entertaining short from Disney.

Where To Watch: Disney Plus

Mariah Carey’s All I Want For Christmas Is You

Come on, I mean we all know the song right! (And if you don’t then what rock have you been living under!) Obviously this is based on her iconic Christmas song, this all-new movie features Mariah Carey’s music and narration in a loving story about little Mariah’s Christmas wish for a puppy. And it includes all three of Mariah’s classic Christmas songs! So if you are a Mariah fan or not this is still worth a watch!

It’s bound to be a white Christmas with this classic! From creator Charles M. Shultz and producer Bill Melendez, it’s A Charlie Brown Christmas. Not only does this timeless special have the distinction of warming hearts young and old, but it has won both an Emmy and a Peabody Award. Whether you are seeing this holiday masterpiece for the first time or the first time in years, you have doubtless heard of that ol’ blockhead Charlie Brown and the little tree that could. Filled with mythology as the gang tries to put on a holiday play, kids big and small will end up with a pretty decent dance party, a lesson for the ages and some good old-fashioned fun. As for the tree — it’s amazing what a little love can do.

A discarded magic top hat brings to life the snowman that a group of children made, until a magician, professor Hinkle, wants it back, and the temperature starts to rise. Frosty will melt or no longer be a jolly soul, if the kids cannot get him away from Hinkle and warm weather, so he hops a train to the North Pole with young Karen. This really is a timeless classic so if you haven’t seen it yet make this Christmas be the time that you catch up!

Which of these Christmas movies animated is your fave? Let us know! 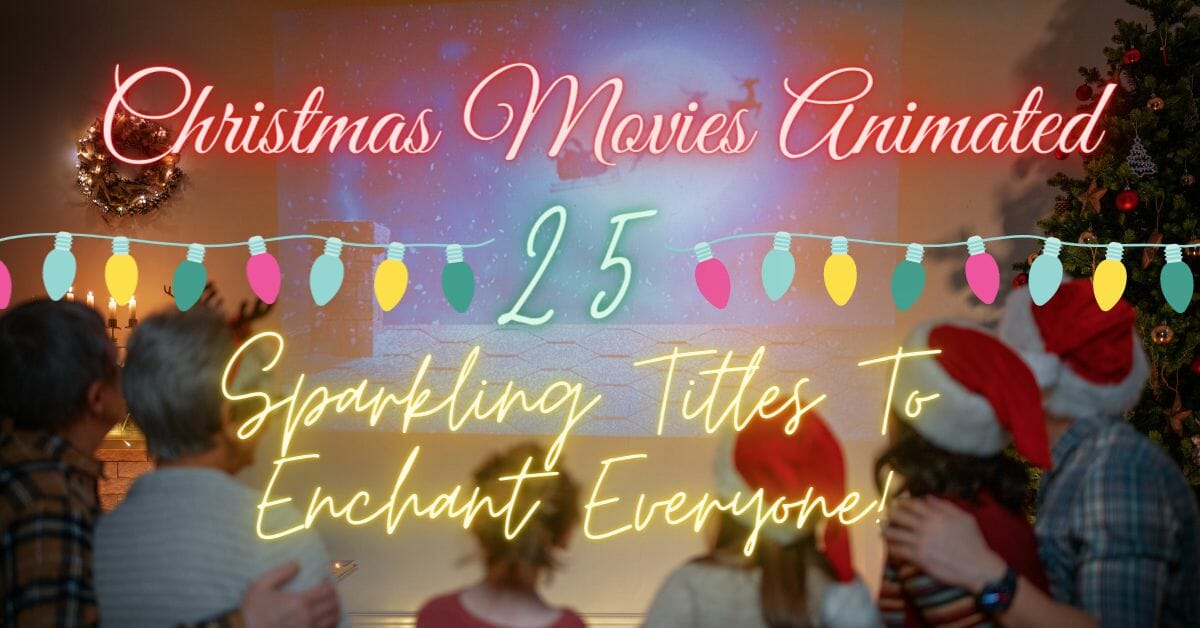