Do you crave a sexy story about an even sexier billionaire bad boys who gets everything and everyone he wants? Then you are in the right place. Here are our top 20 books about the richest men who can devour you. Check it out now!

Elena’s sister is arranged to marry Nicolas Russo – A Made Man, a boss, a cheat even measured against mafia standards. After Elena’s first encounter with him, she realises he’s just as rude as he is handsome. She doesn’t like him or anything he stands for, but her heart has other ideas and can’t stop pounding when he’s near. And he’s always near, telling her what to do and making her feel hotter than any future brother-in-law should.

“Nico is one of the hottest anti-heroes I’ve read. He was obsessed, possessed, and completely consumed with the heroine without claiming her for far too long.” – Mindy Lou’s Book Review

The women on Mr. Rook’s exclusive island are looking for one thing: to have their wildest romantic fantasies come to life. There’s nothing Rook’s staff can’t deliver. But when Stephanie’s sister doesn’t return after her week in paradise, Stephanie will have to pose as a guest to dig for answers. And that means she’ll have to get close to the devastatingly handsome Mr. Rook.

“Oh, Mimi, Mimi, Mimi. What a terrific and wonderfully twisted author she is. Just like with everything I’ve read of her previous work, Mr. Rook had likable characters, lots of snarky goodness, and plots twists that will scramble your mind.” – Harlequin Junkies

What do you do when you wake up in a hotel room beside a tattooed man who is extremely handsome? You fight through your tequila-induced haze, trip over his designer suit and run. And hope that you never see him again. But somehow, I end up in a bet with him that includes four dates with the arrogantly charming man.

“I can’t even describe what this book did to me. I related to the heroine on so many levels, and even to some extent, the hero. At any rate, I finished it 5 minutes ago, and I’m still shaking. I need ice cream.” – author Anne Conley

Cillian Fitzpatrick has been dubbed every wicked thing on planet earth. To the media, he is the Villian. To me, he is the man who saved my life. Now I need him to help me again. Bail me out of the mess my husband got me into. Only he won’t do it for free. The price for the money is my freedom. Now I’m his newest toy.

“The Villain is a deeply satisfying story of patience, acceptance, perseverance and love. Hands down a top 2020 must read! “ – Helena Hunting

Dante Sinclair never cared about his family’s money. All he wanted to be was a cop and now that he’s a homicide detective in Los Angeles, he’s a damn good one. But after he gets injured, he returns to his vacation home in Amesport to recover. Sarah Baxter, a brilliant doctor, recently moved from Chicago to Amesport. When she’s assigned to Dante’s case, there’s an instant heat between them.

“Plenty of heat and tenderness…The subplot…meshes perfectly with the romance, making for a well-rounded story.” —Publishers Weekly

I’ve never been reckless with my heart until I meet a handsome stranger at a secret masquerade ball. I’m not rich or a celebrity – I don’t even have an invitation. And I know that he knows it. Instead of kicking me out, he escorts me through the gardens and into a world of sin and forbidden pleasures. I can’t stop thinking about him, but I need to move on and forget it ever happened. Until he turns up as my new billionaire boss.

Wes Lancaster is determined not to get sucked into some siren’s web. As owner of the professional football team and wildly successful restaurant, his life is full enough. Well, it was, until Winnie Winslow turns up and trash-talks him. Now he can’t stop himself from wanting her.

As any smart paralegal would, Amanda Jenner has researched the hell out of how to seduce a man. And a masquerade ball is the perfect venue for her to put her skills into action. Amanda is thinks she’s hit the jackpot with a tall, dark and sinfully delicious masked man – until that man turns out to be her boss. Mick’s already crossed a line he can never uncross and one taste of Amanda was not enough.

My entire life has been a struggle. But I’m almost done with nursing school so I can finally build a better life. Until disaster strikes – I’m about to be homeless and can kiss my dreams goodbye. At least that is until the mysterious and handsome billionaire, Simon Hudson, makes me a bargain that I cannot refuse.

Trent Turner is stubborn, thick-headed and thinks he knows everything there is to know about the hotel business. With him running the development of the new hotel and me doing the design, our work relationship is far too intimate for two people who despise one another. But he’s not just my billionaire boss from hell, he’s my neighbor too.

“Max Monroe has done it again by giving us yet another billionaire to fall in love with…If you are looking for a laugh out loud hilarious read The Billionaire Boss Next Door is a must read.” –Jackie, MI Bookshelf

Fixed On You – Laurelin Paige

Stalking and restraining orders are a thing of Alayna Wither’s past. With her new MBA in hand, her future is figured out. Move up at the nightclub she works at and stay away from any guy who might trigger her obsessive love disorder. A perfect plan. But what Alayna didn’t take into account was the smart, rich and gorgeous new owner of the nightclub, Hudson Pierce. He’s fixed his sights on her and avoiding him isn’t an option when he offers a business proposition she can’t turn down.

“This book blew me away.” – Emma Hart

I’ve got a big ego and an even bigger bank account. That’s pretty much all I need to say and I’ve already sold 99% of women on going home with me. I’m a jerk and it works for me just fine. Until I met her. She wouldn’t tell me her name or number when she disappeared from the hotel room after the hottest night of my life. Now, I need to find her and I need to keep her.

“This is a must-read for all those who love a hot, dirty mouthed alpha male.” – Alpha Book Club

Brynne Bennett has left scandal in her past and is living good. She’s getting back on track with lots of hard work and focusing on a career in art conservation. When successful and charismatic London businessman Ethan Blackstone buys her nude portrait, he wants to possess more than just her image. He wants her.

Chloe Mills has everything perfected in her life. There’s just one problem: her boss, Bennett Ryan. He’s blunt, inconsiderate and completely irresistible. He’s never been one for a workplace hookup, but Chloe is so tempting that he’s willing to bend the rules if it means he can have her.

Humiliated after being left at the altar, Jade Robert seeks solace at her best friend’s ranch. She doesn’t expect to attract the attention of her friend’s brother. Talon Steel always simply existed, taking from women what is offered and giving nothing in return. Until Jade falls into his life.

“This book is so raw and addictive! Hands down my new favorite series this year.” – Meredith Wild

Bared To You – Sylvia Day

I was drawn to him as I’d never been to anything before. Like a drug, I craved his touch. I was flawed and damaged and he opened those cracks in me so easily. Gideon knew, he had demons of his own and we would become the mirrors that reflected each other’s most private worlds and desires.

Part of a small demon lair in Las Vegas, tattooist Harper Wallis lives a pretty simple life. That changes when her psychic mate is a guy rumoured to be the most powerful demon in existence. Knox Thorne is determined to claim her as his anchor. The billionaire also wants Harper in his bed. She’s not sure she wants either of those things, but it seems that he’s the only one who can keep her safe.

‘It’s been two minutes since my last fix and I need Suzanne Wright to give me more!’ – Edgy Reviews

Alpha-licious in the most unexpected ways, Kaden Barnes always gets what he wants. He’s unable to keep an assistant for long, until Lexie Parker arrives. She’s all business and also hot as sin. When their passion for each other reaches boiling point, Kaden may think he’s in control, but for this billionaire bad boy, going down easy has never felt so good.

Reese Crane is a billionaire bachelor. But his playboy past is preventing him from being named the CEO of Crane Hotels and no one will keep him from his life’s legacy. So he’ll given them a settled, married man to lead the company. Merina Van Heusen will do naythign to get her parents’ hotel back – even marry Reese Crane. It’s a simple business contract, just six months of marriage. But when sparks fly between them, Merina risks falling in love with Reese.

“5 stars! Another amazing start to what I am sure will be another AMAZING series by Jessica Lemmon and I cannot wait until the next book.” – Harlequin Junkie

Georgia Cummings has zero luck with dating and the era of internet is not her friend. No matter how fast she runs, how many corners she turns, she can’t find her way out of this reality where men think crotch selfies are a replacement for small talk. Kline Brooks is the billionaire bad boy – who is also Georgia’s boss. He wouldn’t touch her with a ten foot pole, but she won’t touch him either.

“I highly recommend this one. Fans of romantic comedies, billionaire romances, and sweet and charming reads will certainly want to try out this book.” – Pretty Little Book Reviews

Did we find the sexy billionaire bad boys of your dreams? 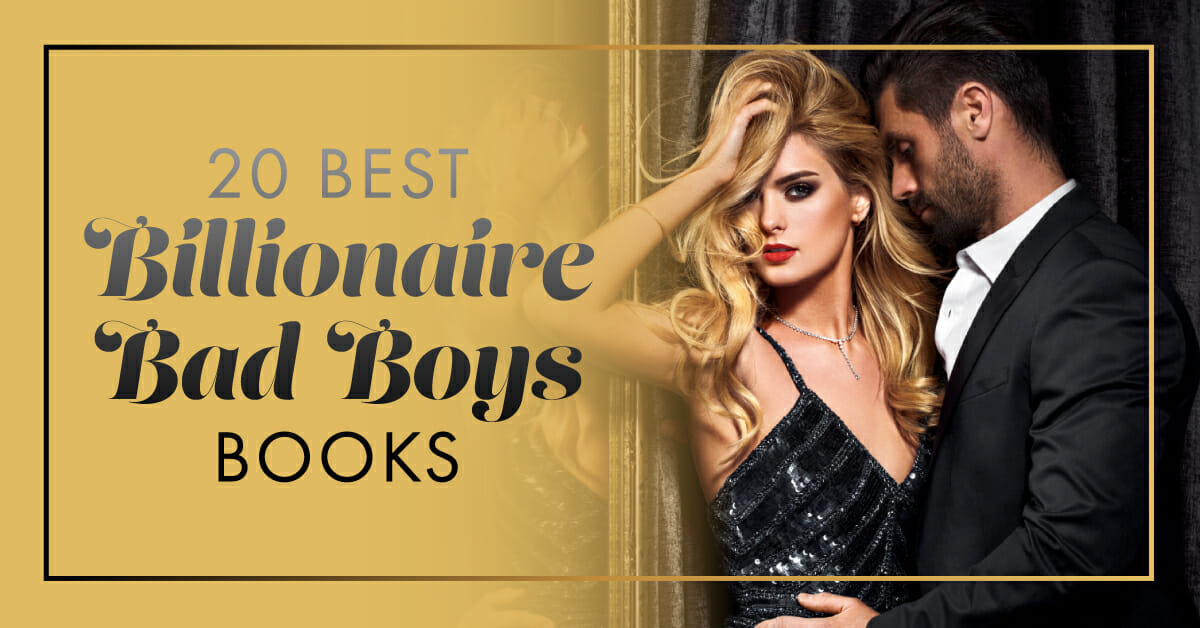