Susan Wiggs is a #1 New York Times bestselling author, who has captured the hearts of readers all around the globe. And since we absolutely love her novels, we’ve collected all the Susan Wiggs books right here (all of her standalones, anyway)! Susan’s most recent novel – The Apple Orchard – is being made into a film and The Lakeshore Chronicles has been optioned for adaption into a series. Both of which we are super excited to see! So, don’t wait any longer and check out Susan’s standalones right here, right now!

Unfortunately, much to our disappointment, some of Susan’s very earliest titles aren’t widely available but you may be able to grab them on paperback on the following links:

Ace reporter Jack Riley loves his job, or at least he did until Madeleine Angston took over as publisher for the Courier. The perfect blonde ice queen is a daunting presence in the newsroom and an irresistible distraction, despite Jack’s determination to avoid her as often as possible. But then a chance encounter puts Jack right at the center of Madeleine’s attention.

In Regency London, a woman escapes from a burning warehouse only to realize she doesn’t know her own identity. Although the locket around her neck bears the name Miranda, she has no recollection of her past. Nor does she know why two very different and handsome men want her.

Once, the sea took everything he loved…

Jesse Morgan is a man hiding from the pain of his past. Keeper of a remote lighthouse along a rocky and dangerous coast, he has locked himself away from everything but his bitter memories. Now, a beautiful stranger has washed ashore. Penniless and pregnant, Mary Dare is a woman who carries painful memories of her own.

She seeks a home. He seeks redemption. What they find is each other.

Leah Mundy has spent her life dashing from town to town, one step ahead of her father’s dreadful reputation. Now she wants to create a home for herself and build a medical practice in Coupeville. But her neighbors are loath to trust a newcomer, especially a woman doing a man’s work.

The You I Never Knew

Michelle Turner thought she lost everything at seventeen. When her father learned of her affair with Sam McPhee – a hired hand – he had Sam fired and destroyed his family. Michelle, pregnant and alone, fled to Seattle. Now as a successful advertising exec, she is safe. But her son – a troubled teen on the verge of self-destruction – is lost to her.

Sandra Winslow’s politician husband died in a mysterious accident two years ago. And she was left under a cloud of suspicion. She decides to sell her beach house on the edge of town and hires Mike Malloy, who touches her lonely heart. But can she trust a man with ties to a community she’s eager to leave behind?

As an irresponsible young mother, Jessie Ryder knew she’d never be able to give her newborn the stable family that he older sister Luz could. So Luz and her husband adopted little Lila and told her Jessie was but a distant aunt. Sixteen years later, Jessie is suspending her photojournalism career to return home – even if it means throwing her sister’s world into turmoil.

Summer By The Sea

With a little determination and a lot of charm, Rosa Capoletti took a run-down pizza joint and turned it into an award-winning restaurant. Now Alexander Montgomery – Rosa’s teenaged love affair – is back in town. And reunited at the beach house where they first fell in love, they discover that the secrets of the past are not what they seem.

The Ocean Between Us

After years of following her navy officer husband on assignment around the world, Grace Bennett realizes that she’s left something behind: herself. And their already-strained relationship is pushed to the edge when old secrets are revealed.

Lily Robinson and Sean McGuire have nothing in common. She guards her independent lifestyle. He’s always been a rolling stone, making his own way. But with the sudden deaths of a couple close to them both, the two become joined in grief as they care for three orphaned children.

Each summer, Kate Livingston returns to her family’s lakeside cottage, a place of simple living and happy times – a place where she now hopes her shy son can blossom. But her quiet life gets a bit more interesting with the arrival of an intriguing new neighbor, JD Harris.

Sarah Moon tackles life’s issues with a sharp wit in her syndicated comic strip, Just Breathe. With both Sarah and her cartoon heroine undergoing fertility treatments, her fiction often represents her reality. However, she hadn’t scripted her husband’s infidelity.

How I Planned Your Wedding

Here is the all-too-true tale of a mother and daughter collaborating on life’s ultimate celebration – a dream wedding. Join mother and daughter as they wade through the trenches of flowers and favors, grueling gown decisions…and the cold, cruel realities of a budget.

Linda Davis’ local fabric shop is a place where women gather to share their creations – wedding quilts, baby quilts, memorial quilts. Each bound tight with dreams, hopes and yearnings. Now, as her only child readies for college, Linda is torn between excitement and heartache.

Elaine St. James has it all – a thriving career as an elite Manhattan publicist, A-list best friends and a gorgeous, high-profile boyfriend her parents adore. But when he breaks up with her on Christmas Eve, Elaine is faced with the prospect of spending the holidays alone. Until the man she loved long ago reappears.

Off the coast of Washington lies Spruce Island, home to Rainshadow Lodge, the perfect summer retreat. Neither Mitch Rutherford or Rosie Galvez expect to find romance during their month-long visit to the rambling Victorian getaway. And despite their differences, they find themselves drawn to each other.

Annie Harlow knows how lucky she is. The producer of a popular TV cooking show, she loves her handsome husband and the beautiful Los Angeles home they share. And now, she’s pregnant with their first child. But in an instant, her life is shattered.

Map Of The Heart

Love and family. War and secrets. Betrayal and redemption.

Widowed by an unspeakable tragedy, Camille Palmer has made her peace with the past and settled into the quiet safety of life with her teenage daughter Julie in a sleepy coastal town. Then the arrival of a mysterious package breaks open the door to her family’s secret past.

Between You And Me

Caught between two worlds, Caleb Stoltz is bound by a deathbed promise to raise his orphaned niece and nephew in Middle Grove, where life revolves around family, farm and faith. And long-held suspicions about outsiders.

At the break of dawn, Caroline Shelby rolls into Oysterville, Washington, a tiny hamlet at the edge of the raging Pacific. Now the legal guardian to two children who were orphaned in a single moment, Caroline’s fleeing to the only safe place she knows. She’s come home. Home to a place she thought she’d left forever.

The Lost And Found Bookshop

“If you had to start over, what would you do and who would you be?”

In wake of a shocking tragedy, Natalie Harper inherits her mother’s charming but financially strapped bookshop in San Francisco. She also becomes caretaker for her ailing grandfather Andrew. But he’s showing signs of decline. And Natalie needs money to get him the care he needs, but he’s refusing to sell the store.

Jerome “Sugar” Barnes learned the art of baking in his grandma’s bakery. When the restaurant that shares his commercial kitchen loses its longtime tenant, a newcomer moves in: Margot Salton, a barbecue master from Texas. Margot is looking for a fresh start and the powerful attraction between Margot and Jerome is just what she needs. Until her past comes back to haunt her.

Which of these Susan Wiggs books are your favorite? Let us know! 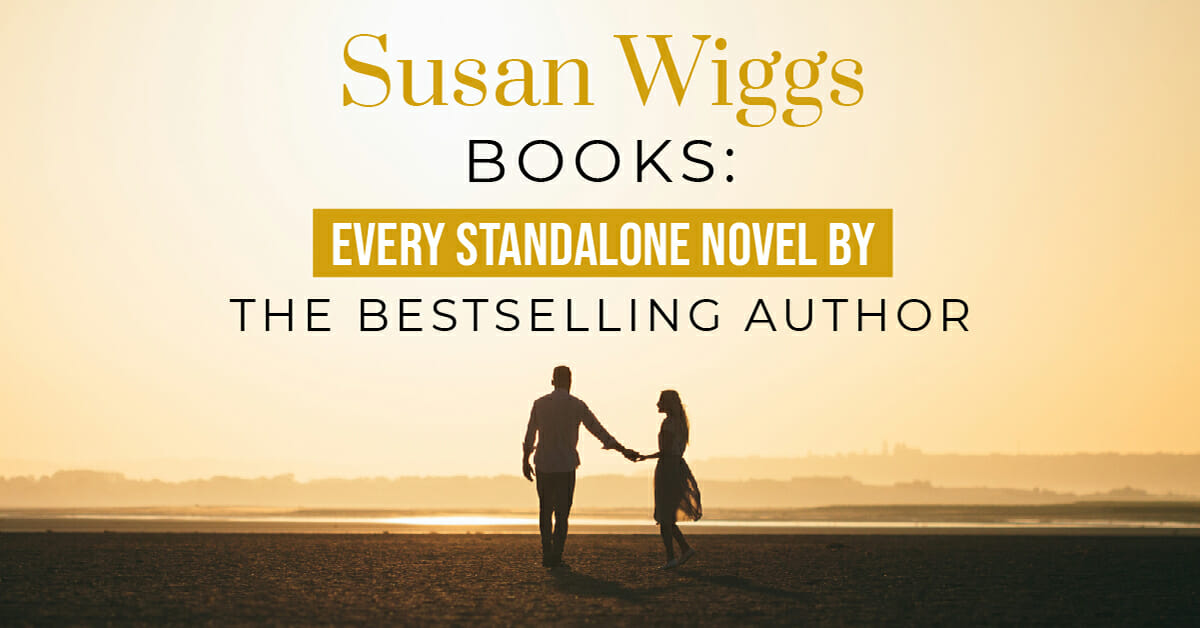