If you love Robyn Carr, then check out – Robyn Carr Series: Romantic Reads From The Virgin River Author!

Orphaned and raised by her uncle, the feisty sixteen-year-old Chelynne resolves to show her gratitude by marrying a man of her uncle’s choice. Although she expected the worst, the man is actually the dashing future Earl of Bryant, Chadwick Hawthorne. And suddenly being a wife doesn’t seem too bad. But he spurns her affection and remains her husband only in name.

Riding into the arena under the furling blazon of the blue falcon, Sir Conan de Corbney accepts a token from the young beauty, Lady Chandra, sparking a romance foretold long ago. That is, unless Conan’s mother can help it. And she colludes with her son’s rival, Sir Tedric, to arrange a lucrative marriage for her son and weds him to Chandra’s older sister.

A peasant farm girl has no place consorting with feuding lords, yet that’s exactly what Jocelyn Cutler sets out to do. Now Jocelyn finds herself trapped between the tyrannical Lord Kerr, and the dangerous rogue, Sir Trent Wescott.

New to the Windsor court, beautiful and quick-witted Felise Scelfton instantly becomes the coveted object of desire. Knights brandish their swords for her hand in marriage, but King Henry II has already decided her fate – he gives her hand to Sir Royce Leighton to seal a political alliance. And their arranged marriage gives way to desire.

The Black Prince of England hungers to capture the lands of France and he’s got the perfect knight for the task – Sir Hyatt Laidley. In exchange for years of faithful service, Hyatt will receive both land – and lady – of De La Noye in Aquitaine. They attack and the Lord and castle fall, but the newly widowed Aurelie will not be so easily conquered.

The heiress to the Bellerose estate has gone missing and Charlotte’s future husband, Lord Geoffrey Seavers, is in desperate need to finance his royal fleet – her disappearance means that the Bellamy inheritance slipped through his fingers. Enter Alicia, a tavern maid of uncertain parentage. And since no one at court has ever actually seen Charlotte, Geoffrey makes Alicia pose as Charlotte.

Anne Gifford’s dowry – or lack thereof – is of no concern to Sir Dylan DeFrayne. Wrapped in each other’s arms, what more could they possible need? Yet their passion can never be sanctioned – they’re families have been sworn enemies for decades. Lest more blood be shed, the two must keep their affair a secret and plot their elopement.

Widowed at thirty-three with two small kids, Beverly Simpson wants someone to blame. Angry, hurt, and full of regret for what she’s lost, she rails against a once trusted God and hides her loneliness behind a sassy exterior. Joe Clark is intrigued by her life and stubbornly pursues her. However, they have two very different outlooks on life.

Born to a respected family, seventeen-year-old, English beauty Vieve Donnelle always gets what she wants. But when word arrives that her father’s estate isn’t as wealthy as it appears, she must rethink her betrothal to an impoverished aristocrat. Enter Captain Tyson Gervais, a colonial sea captain travelling to England for business in foreign trade. And Vieve can’t resist thinking about him.

Mike Cavanaugh is a firefighter – he rescues people. Inviting them home isn’t usually part of the job description, but Christine Palmer is an exception. He wants to protect her, to make her life as a single mother a little better. And he’s happier than he’s been in years with her.

Nineteenth-century Philadelphia. In this sweeping saga of three generations of strong women, all who seem cursed when it comes to love. At its center is young Lilly Armstrong, a beauty on the brink of womanhood, too brave and fearless to settle for the status quo. She wants to carve out a life of independent freedom for herself. A life not dependent on men. But of course there is a man.

Still reeling from her young son’s death, Jackie Sheppard retreats to a small town in the Colorado Rockies. Comforted that no one knows of her tragic past, she’s thrilled to take a job at a family law firm, where she meets Tom, the local carpenter. But despite the budding romance, Jackie cannot feel safe. Strange things are happening and she believes she may be the next target of a sadistic killer.

Sable has everything and her bestselling novels have made her a star, but she has a past she wants to hide. Elly hides herself within walls of academia, afraid to admit she’s tired of being alone. Barbara Ann is the talent behind twenty-six romance novels, but she’s lost control of her life. Beth’s popular mysteries become the only way she can fight against the tyranny of an abusive husband. Together, they realize a dream.

After her divorce, Charlene Dugan vowed never to get married again – a promise she has kept for twenty-five years. Until she finds herself saying the well-known phrase “Let’s get married!” Almost immediately, her perfect life begins unraveling at the seams. And the wedding party is officially out of control.

Nikki survived a terrible marriage and a worse divorce, but now suddenly has custody of her kids again. Dixie is through with looking for love when all she gets are expensive gifts and heartache. Carlisle is trying to move forward from a bad relationship that has destroyed his trust. When the three friends are offered the chance to join a new airline in Las Vegas, they don’t hesitate. They’re starting over in search of their own blue skies.

Clare Wilson is starting over. She’s had it with her marriage to a charming serial cheater. Even her own son thinks she’s given his father too many chances. With the support of her sisters, Maggie and Sarah, she’s ready to move on. Until a near-fatal car accident lands Clare in hospital and her life takes another detour.

Gerri, Andy, and Sonja are experiencing dramatic changes in their lives. Miraculously, it’s BJ – the newcomer to Mill Valley – who steps into their circle and changes everything. The woman with dark secrets opens up to her neighbors and together they get back on track, stronger as individuals and unfaltering as friends.

Jennifer Chaise is proud of her life. Coming from nothing, she’s used her beauty to her advantage and is swept up in the glamorous world of wealth and privilege as the mistress of a high-flying businessman. But when she walks in on a violent scene in their Las Vegas hotel room, Jennifer knows she can no longer ignore the truth about her boyfriend and flees.

In the aftermath of her financier husband’s suicide, Emma Shay Compton’s dream life is shattered. Richard Compton stole his clients’ life savings to fund a lavish life in NYC and although she was never involved in the business, she has to bear the burden of her husband’s crimes. And she’s left with nothing, except the one friend who stands by her.

For the Hempsteads, two sisters who married two brother and had three daughters each, summers were idyllic. The women would escape the city as soon as school was out to gather at the family house on Lake Waseka. All of their problems drifted away as the days passed in sun-dappled contentment. Until the summer that changed everything.

Cassie, Julie, Marty and Beth have been best friends since seventh grade. But this summer, teetering on the threshold of thirty, these women are going to need each other more than ever. As these four friends deal with life’s challenges, the strength of their bond will see them through.

Sunrise on Half Moon Island

Adele and Justine have never been close. Born twenty years apart, the sisters love each other but they don’t really know other. When Addie dropped out of university to care for their ailing parents, the elder sister Justine, a successful lawyer, covered the expense. It was the best arrangement at the time, but now that their parents are gone, the future has changed dramatically for both of them.

From the outside, Lauren Delaney has a life to envy – a successful career, a solid marriage to a prominent surgeon and two beautiful daughters who are off to good colleges. But on her twenty-fourth wedding anniversary, she makes a decision that will change everything.

Get Excited For A Family Affair Coming April 5 2022

Which of these Robyn Carr books will you be reading next? Let us know! 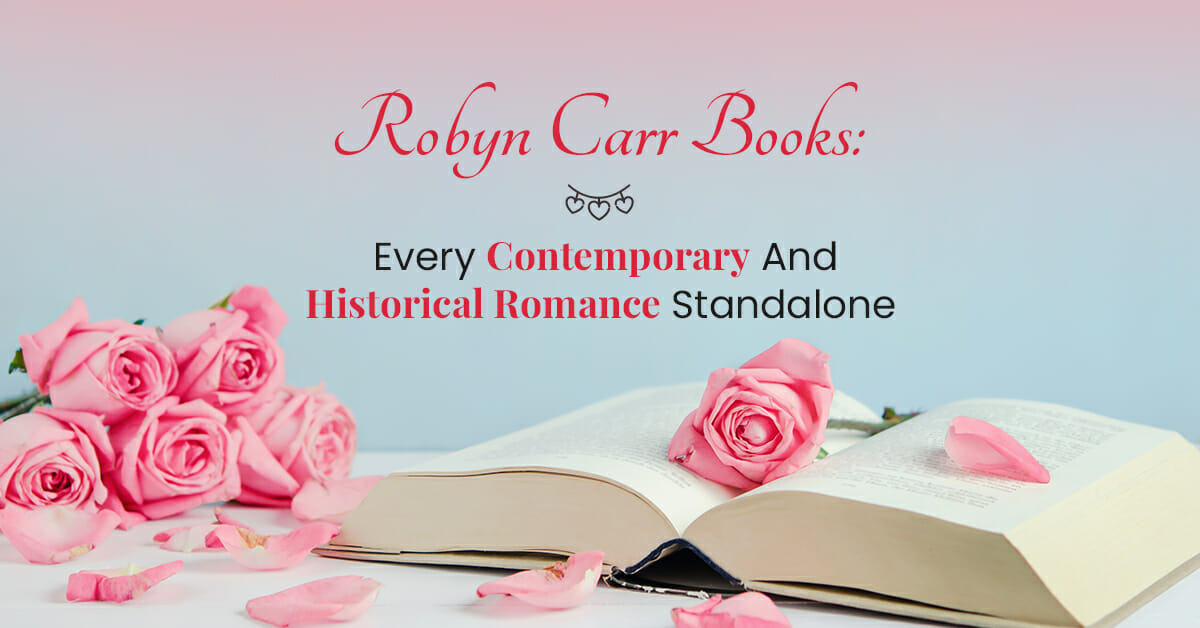