It’s time to hit the books! College romance books are all about the ups and downs, the highs and lows of college. From roommates to sports stars, there’s no subject that isn’t covered. And we’re certain that you are going to absolutely adore these. So, check out these grade-A books right now!

Taylor Caldwell can’t decide if she wants to kiss her new college roommate or punch him. On the one hand, Hunter Zaccadelli is a handsome blue-eyed bundle of charm. On the other hand, he’s a tattooed, guitar-playing bad boy. Maybe that’s why she’s afraid of falling in love with him. So she needs him gone, before it’s too late.

Kip Carmichael is no pretty boy – he’s a rough, dirty giant. His hair is unruly and his beard is so thick, his friends on the team call him Sasquatch. The first time he lays his eyes on Theodora ‘Teddy’ Johnson across the keg at a party on night on Jock Row, she’d been relegated to the sidelines by her friends. After weeks, he finally offers to be her hairy godmother. But the minute their eyes meet, he’s a goner.

He watched her, but never knew her. Until a chance encounter meant that he became her savior. The attraction between them is undeniable. Yet the past he’d worked so hard to overcome and the future she had put so much faith in threatens to tear them apart.

Allie Hayes is in crisis mode. With graduation looming, she still doesn’t have the first clue about what she’s going to do after college. To make matters worse, she’s nursing a broken heart thanks to the end of her longtime relationship. And although wild rebound sex is definitely not the solution to her problems, gorgeous hockey star Dean Di Laurentis is impossible to resist.

College junior John Logan can get any girl he wants. For this hockey star, life is a parade of parties and hook-ups, but he hides a growing despair about the dead-end road he’ll be forced to work after graduation. A sexy encounter with freshman Grace Ivers is just the distraction he needs, but when a thoughtless mistake pushes her away, Logan plans to spend his final year proving to her that he’s worth a second chance.

The Studying Hours: How to Date a Douchebag – Sara Ney

Sebastian ‘Oz’ Osborne is a walking, talking cliche. One of the university’s most celebrated student athlete and possibly the biggest douchebag. Jameson Clarke may be the university’s most diligent student – but she is no prude. And she’s determined to finish the year without Oz in her life. But he wants her.

The Coincidence of Callie and Kayden – Jessica Sorensen

Callie has grown up keeping her feelings locked away from the outside world, and as her painful past threatens to consume her life, most days it’s a struggle just to breathe. For as long as Kayden can remember, suffering in silence has been the only way to survive. Until one night when Callie and Kayden’s worlds collide. And when they end up at the same college, Kayden does everything in his power to convince her that it’s fate.

Cameron Hamilton is six feet, three inches of swoon-worthy hotness, complete with a pair of striking blue eyes and a remarkable ability to make Avery want things she believed had been irrevocably stolen from her. Getting involved with him is dangerous. Yet ignoring the simmering tension that sparks between them is impossible.

Have you heard the rumor around campus about the locker room? Legend has it if you bring a girl into the sacred after-game domain of the baseball locker room, it will end with a walk down the aisle. But not all baseball players believe that superstition, me included. So when the girl I’ve fallen for brushes me off, I start to question if I need to switch my way of thinking and hand out a coveted invitation to the locker room.

All Lined Up – Cora Carmack

Dallas Cole hates football. College is finally her time to leave it in her past. But life has other plans. As if going to the same college as her football star ex wasn’t bad enough, her father has decided to coach the college team. Carson McClain is determined to go from second-string quarterback to the starting line-up. He needs the scholarship and the future that football provides. But when a beautiful redhead falls into his life, his focus is tested.

Cath is a Simon Snow fan. Okay, the whole world is a Simon Snow fan, but for Cath, being a fan is her life and she’s really good at it. Now that Cath and her twin sister Wren are going to college, Cath is on her own and completely out of her comfort zone. For Cath, the question is: can she do this?

Sydney is living in an idyllic bubble. She lives with her best friend, has a great boyfriend, and the music coming from the balcony opposite is fast becoming the soundtrack of her life. But then she finds out her boyfriend is cheating on her. Moving on is harder than she expects, but Ridge, the attractive man behind the music, is giving her hope and they begin to write songs together.

Abby Abernathy doesn’t drink or swear and she works hard. Her dreams of a new beginning are quickly challenged by the university’s walking one-night stand, Travis Maddox. Handsome, built, covered in tattoos – he’s everything Abby needs to avoid. But he’s set his sights on her and tricks her into his life with a simple bet.

For almost two years now, Kiera’s boyfriend, Denny, has been everything she’s ever wanted: loving, tender, and endlessly devoted to her. When they head off to a new city to start their lives together, Denny at his dream job and Kiera at a top-notch university, everything seems perfect. Then an unforeseen obligation forces the happy couple apart.

There was the time before Tessa met Hardin, and then there’s everything AFTER

Tessa is a good girl with a sweet, reliable boyfriend back home. She’s got direction and ambition. But she’s barely moved into her freshman dorm when she runs into Hardin, her mother’s worst nightmare. With his tousled brown hair, irresistible British accent, tattoos and lip ring, Hardin is undeniably attractive but completely different to what Tessa is used to.

If Hannah Wells wants to get her crush’s attention, she’ll have to step out of her comfort zone and make him notice her. Even if it means tutoring the annoying, childish and cocky captain of the hockey team in exchange for a pretend date. All Garrett Graham wanted is to play professional hockey after graduation, but his plummeting GPA is threatening his dream. So he’s all for it when Hannah wants to tutor him and make another guy jealous. But he soon realizes that he doesn’t want to pretend to date anymore – he wants to convince Hannah that the guy she wants looks a lot like him.

What I learned after last year’s distraction cost my hockey team our entire season? No more screwing up. No more screwing, period. As the new team captain, I need to focus purely on hockey and school now. But there’s nothing in my rulebook that says I can’t be friends with a woman. And Demi Davis is one cool chick. And the fact that she has a boyfriend eliminates the temptation to touch her. Until she’s single and looking for a rebound. And she’s making a play for me.

The Hook Up – Kristen Callihan

Anna Jones just wants to finish college and figure out her life. Falling for star quarterback Drew Baylor is certainly not on her to do list. Confident and charming, he lives in the limelight and is too gorgeous for his own good. If only she could ignore his heated stares and stop fantasising about him. Easy, right?

Four years ago, Kacey Cleary’s life imploded when her car was hit by a drunk driver, killing her parents, boyfriend and best friend. She wants to leave her past behind. Armed with two bus tickets, Kacey and her fifteen-year-old sister, Livie, escape to start over in Miami. Kacey can handle anything – anything but her mysterious and handsome neighbor.

I Dare You – Ilsa Madden-Mills

The late night text is random, but ‘Bad Boy Athlete’ sure seems to know who she is. Spend one night in his bed – a night he promises will be unforgettable – and she can solve the mystery of who he is. She knows she shouldn’t, but what else is she going to do with her boring Valentine’s Day? One sexy hook-up later, her mind is blown and the secret’s out. He’s Maverick Monroe, the most talented football player in the country.

“Christ on a cracker you guys, this book was completely irresistible to me.” Bookgasms Book Blog

Scarlett visits Jock Row with her friends – the universities hottest party scene and breeding ground for student athletes. Being a well known jock-blocker gets her noticed for all the wrong reasons and just like that ,she’s banned from Jock Row. ‘Rowdy’ Wade is the hot shot short-stop for the universities baseball team – and the unlucky guy who has to keep Scarlett out of the Baseball House.

NEVER HAVE I EVER, swooned and laughed so much…  Book Bruin, Blogger

The last thing Gray Grayson wants to do is drive his agent’s daughter’s bubblegum pink car. But he needs wheels and she’s studying abroad. What starts as an irate text turns into a texting friendship with Ivy Mackenzie, the car’s owner. Things change when she comes home. Gray wants to be with Ivy but Ivy doesn’t have sex with friends, especially not with a certain football player. No matter how hot he makes her.

Layken’s father died suddenly, leaving her to gather every ounce of strength to be a pillar for her family to prevent their world from falling apart. Now her life is taking another unexpected turn. Her mother gets a job that makes them move across the country. A new home means new neighbours. And Layken’s new neighbour is the attractive Will Cooper.

The Year We Fell Down – Sarina Bowen

A serious accident means that Corey Callahan will start college in wheelchair instead of being a varsity ice hockey player. Across the hall lives Adam Heartley, another would-be hockey star with his leg broken in two places. He’s way out of Corey’s league. He’s also taken. But an unlikely alliance forms between the pair.

The Understatement Of The Year – Sarina Bowen

Five years ago, Michael Graham betrayed the only person who ever really knew him. Since then, he’s made an art of hiding his sexual orientation from everyone. So it’s a shock when his past strolls right into the locker room, sporting a bag of hockey gear and the same smile that rendered Graham defenseless. With one word, the team’s new left wing could destroy Graham’s life as he knows it.

Which of these romance books college is your winner? 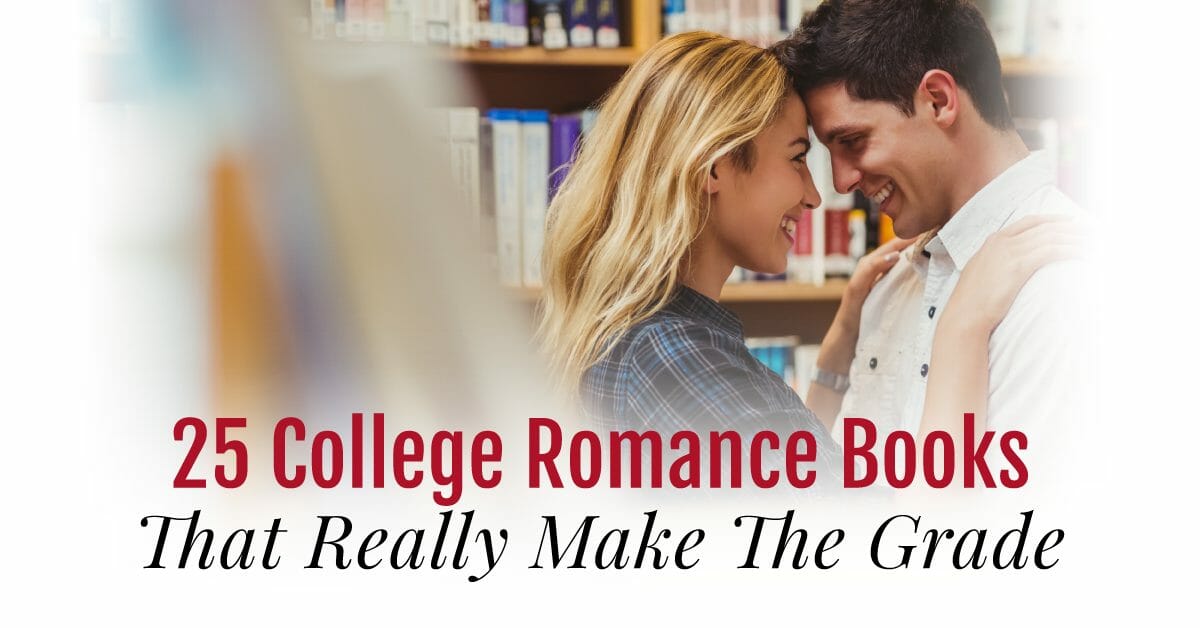