Friday Romance Reads For You To Devour – 4/29

…Some people call it Heaven. The residents know it as Everlasting. When you arrive, adjustments had to be made, especially if you were meant to live and the person you saved . . . slated to die.
…What kind of guardian angel gets knocked back to earth? The kind who falls in love with his ward.
… Chance Godricson is Kenya Kilmartin’s guardian, and when, on arrival, he’s hired to help her through a difficult time in her life, he just might fall prey to earthly temptation. 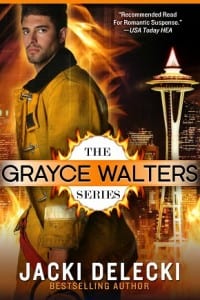 THE GRAYCE WALTERS SERIES: Grayce Walters, intuitive animal acupuncturist, finds herself drawn into danger in the name of protecting her animal clients. One extraordinary woman reluctantly battling evil on the streets of Seattle with an unconventional collection of crime-fighting accomplices: Her heart throb, alpha-macho hunk, Fire Investigator Captain Ewan Davis; her best friend James, a gay cross-dressing, karate master who can take bad guys down as long as he doesn’t ruin his hair; her office assistant Hollie, a street wise girl gamer; and Mitzi, a black standard poodle who’s anything but standard.

GAMBLING ON LOVE CAN BE DEADLY

Injured while helping capture a notorious serial killer, all New Orleans firefighter Connor Scott wants is to visit his grandmother in Florida for a few days of rest, relaxation and recovery. The last thing he expects is to be stuck on a bus loaded with senior citizens—and his ex-wife.

Alyssa Scott thought she’d left the baggage of her old life far behind when she moved to Florida. Instead she’s chaperoning the senior group and dealing with the one person she never expected to see—her ex-husband.

Sparks fly and passions reawaken. Neither Connor nor Alyssa can deny the feelings they still hold for each other. But a sinister threat from Connor’s past thrusts them into a perilous game of cat-and-mouse to stop a ruthless killer before time runs out. Will Connor gamble everything to save the woman he loves?

One night changes everything . . . again.

Years ago, when Ryan Stewart saw Shawna Ferguson, it was love at first sight. Unfortunately, he wasn’t a free man, and his deception caused him to lose her after a weekend that changed his life.

When Shawna’s sister and brother-in-law set her up on a blind date, she has no idea it’s with Ryan, with whom she’d spent a weekend she wishes she could forget. She reluctantly agrees to finish the date with him, but doing so leaves her vulnerable to his charms and the heat he ignited in her that very first night.